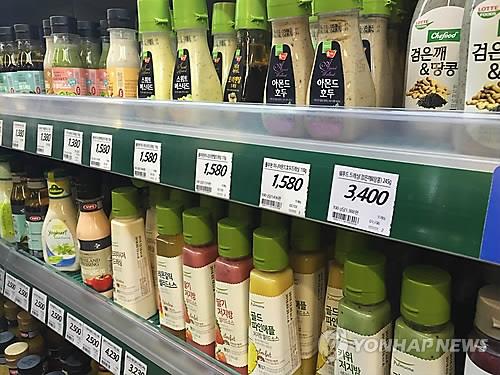 The increase in sauce consumption is said to result from increased preference for convenience food and a growing number of restaurants. (image: Yonhap)

SEOUL, Dec. 26 (Korea Bizwire) — The production of sauces has increased in South Korea, as the prevalence of traditional “homemade” meals has waned and the popularity of convenience food and eating out has increased.

Various sauces are being produced to meet consumer needs, but a drop in sales of traditional sauces including ketchup and mayonnaise has been observed.

Total sales of sauces have increased by 16.9 percent since 2013, reaching approximately 2.5 trillion won (US$2.22 billion) on an annual basis.

The increase in sauce consumption is said to result from increased preference for convenience food and a growing number of restaurants.

The Ministry of Agriculture, Food and Rural Affairs reported that the preference for smaller bottles of high-quality sauce increased over the last year, especially in simple multi-purpose sauce.

Also, as the number of single households increased, the popularity of small packages of sauce has increased in turn.

Western sauces are also increasingly popular as consumers now have the opportunity to experience diverse cuisines from around the world.

The most popular export destinations included China, the U.S and Russia, with bulgogi sauce and jjigae sauce among the exports. Imports rose 24.1 percent to US$16.6 million last year.

Sauces including oyster sauce, barbecue and steak sauce were typically imported from China, Japan and U.S.