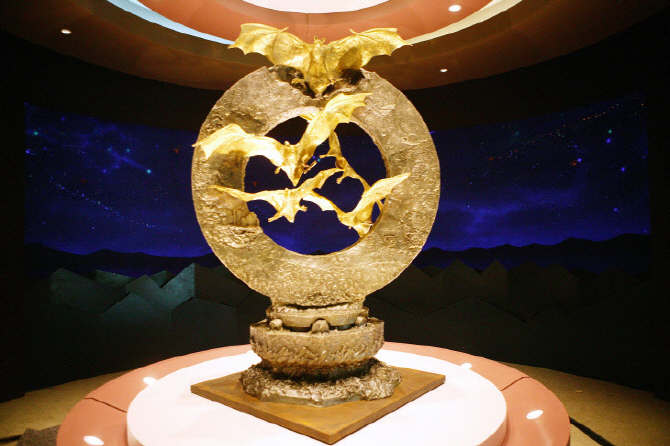 When the sculpture was made, the market price of the pure gold it contained was 2.7 billion won, but now it is now estimated to have increased to 8.5 billion won. (image: Hampyeong County Office)

HAMPYEONG, Apr. 12 (Korea Bizwire) — The outdoor exhibition of a sculpture of a golden bat worth 8.5 billion won (US$7.45 million), which was sought by a trio of thieves last month, will be promoted.

According to Hampyeong County, South Jeolla Province on Thursday, the solid gold sculpture of a bat will be displayed at the center plaza of the Expo Park during the Hampyeong Butterfly Festival, which will open on April 26 and run through May 6.

The sculpture will be moved to Expo Park Square in a bulletproof glass container from the Golden Bat Exhibition Hall. It will travel approximately 200 meters, on April 24, two days before the festival’s opening.

The sculpture will be insured against theft, loss or damage, and will be displayed behind bulletproof glass.

There will be barriers installed to maintain a certain distance between visitors and the sculpture. Closed-circuit television (CCTV) and safety personnel will be monitoring the sculpture 24 hours a day.

Local authorities decided to promote the outdoor exhibition as the public was eager to see the sculpture after the attempt to steal the golden bats.

However, local government officials said that further attempts at theft of the statue were unlikely, given that it weighs 570 kilograms and that numerous additional security measures had been implemented.

Golden bats were thought to have been extinct on the Korean Peninsula. However, with one appearing in 1999 in Daedong Villeage at Hampyeong County, the sculpture was commissioned at Hongik University in 2007.

When the sculpture was made, the market price of the pure gold it contained was 2.7 billion won, but now it is now estimated to have increased to 8.5 billion won.

Meanwhile, on March 15, a trio of thieves tried to enter the Exhibition Hall in search of the golden bat statue, but alarms were set off and scared them away without fully posting the shutters of the door.

Police arrested two people on charges of attempted theft and are in pursuit of the other.