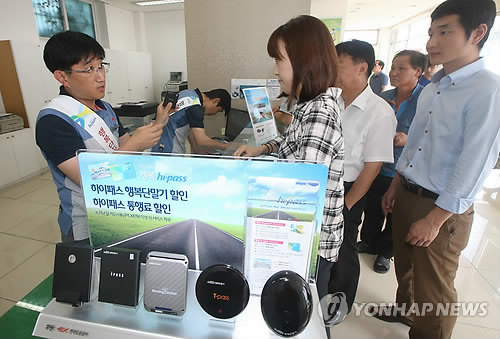 Korea’s HI-pass system allows drivers to pay highway tolls without having to stop and hand over cash, using an onboard unit (OBU) and a Hi-pass card. (image: Yonhap)

SEOUL, July 17 (Korea Bizwire) –The Korea Expressway Corporation‘s Happy Hi-pass OBU has been introduced as an example of a “Government 3.0” project coming to fruition.

The Ministry of Government Administration and Home Affairs held a discussion session for further development of “Government 3.0” projects on July 16, and introduced a number of high-value projects, including a Hi-pass terminal.

Korea’s HI-pass system allows drivers to pay highway tolls without having to stop and hand over cash, using an onboard unit (OBU) and a Hi-pass card. However, the price of an OBU is more than 100,000, which is burdensome for many drivers.

To reduce OBU prices, the Korea Expressway Corporation explored various options with financial firms and device manufacturers. After careful consideration, the manufacturers decided to develop products with only essential features, and the financial firms had the idea to offer subsidies in connection with their financial products.

As a result of this process, the Happy Hi-pass OBU was born last September. With a low price of less than 30,000 won, it gained explosive popularity, and more than 1 million units had been sold as of July 5.

Government 3.0 is an upgrade from version 2.0, which is characterized by bilateral interaction between citizens and government, and version 1.0, which is based on the one-way delivery of services to citizens. President Park Geun-hye came up with an action plan in 2013 to realize Government 3.0 projects.

Along with the low-cost Hi-pass device, the Drug Utilization Review system from the Health Insurance Review & Assessment Service, and the One-stop Inquiry System for Sports Class Voucher by the Korea Sports Promotion Foundation were introduced as successful examples of Government 3.0 projects.