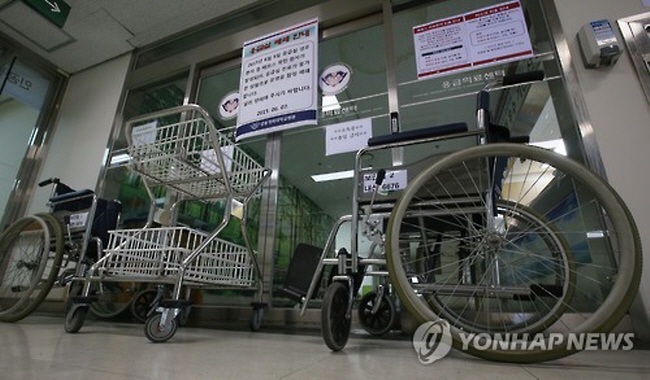 The medical staff who treated the MERS patient at the clinic were ordered to be isolated at home from June 3. (image: Yonhap)

PYEONGTAEK, Jun. 9 (Korea Bizwire) — An auxiliary nurse from a clinic in Pyeongtaek, the region at the epicenter of the MERS virus outbreak, shared her story of what it feels like to be isolated at home for treatment to prevent the further spread of the virus.

After a patient who visited the clinic where she works was confirmed to be infected with the virus, medical staff who treated the patient at the clinic were ordered by the Ministry of Health and Welfare to be isolated at home from June 3.

Since then, the woman has been banned from leaving her home. Workers at the nearest Health Community Center are managing the quarantine.

She has also been equipped with a thermometer, and must report her condition twice a day using her phone.

She is also isolated from her own husband, as she was ordered to stay more than 2 meters away from all other individuals.

Her husband is staying in their children’s room, as their two kids have been sent to their grandparent’s house after their school was shut down temporarily on June 2.

She said that although she feels trapped and annoyed from being a prisoner in her own home, as a nurse she wants to set an example by following the strict rules.

However, she said she understands that individuals isolated at home would surely feel tempted to go outside even for a few minutes.

She also added that authorities will need to support individuals who have difficulty ordering food.

She said that everyone is victim in this MERS situation, and asked people in isolation not to blame the situation on anybody, and to stand strong until the virus is eradicated.