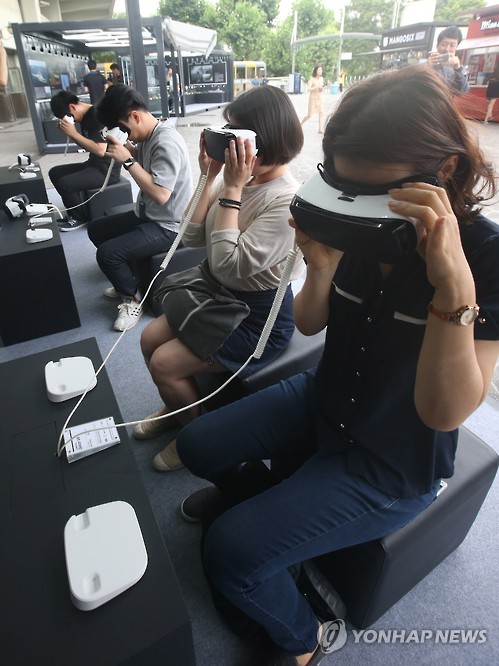 In a joint statement, four related ministries described 2016 as the “original year” for South Korea’s full-fledged efforts to advance its VR technology and industry. (image: Yonhap)

The government will create 40 billion won (US$34.5 million) of special funds, 20 billion won this year and the rest in 2017, for small and medium-sized firms immersed in developing VR gear and content.

The VR sector will be added to the list of “new industries” eligible for tax credits of up to 30 percent for research and development (R&D) projects.

The decision was made at an interagency meeting on promoting trade and investment.

In a joint statement, four related ministries described 2016 as the “original year” for South Korea’s full-fledged efforts to advance its VR technology and industry.

Many agree that VR will be one of the next big things in technological innovation and the change of daily life.

South Korea, an ICT powerhouse, has some competitive edge in hardware, but the country’s platform and content development is still in a nascent stage.

The government plans to expand its VR-related support to the construction, education and medical service fields beyond gaming and theme parks.

It will also promote Digital Media City (DMC), a high-tech complex in western Seoul, as a strategic base for the VR industry.

The “Seoul VR Festival” will be held in the DMC in October.

The government plans to use the 2018 PyeongChang Winter Olympics as an opportunity to publicize South Korea’s VR technology.

Such sports as ski jumping and snowboarding will be filmed by 360-degree virtual-reality cameras and broadcast live on headsets.

KT Corp.’s economy and management research institute conducted a study of online traffic on the issue for four months starting in January.

“As VR content and gear started being provided on a full scale two years ago, public attention to the field has grown in general,” said Shin Na-ra, a researcher with the KT organization.