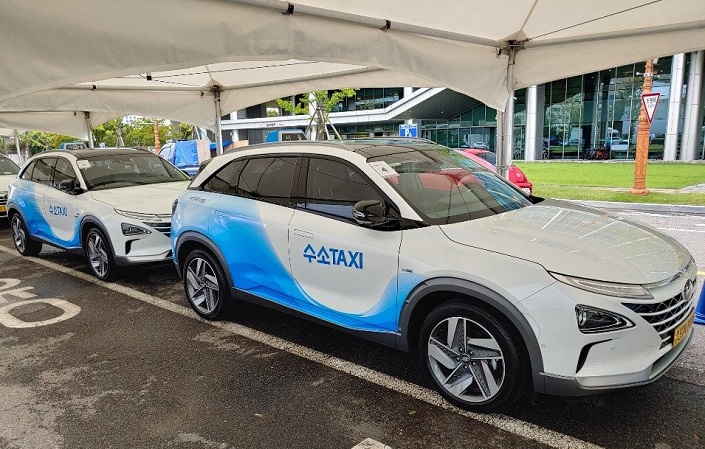 This photo, provided by the Seoul city government on Sept. 10, 2019, shows hydrogen-powered taxis.

SEOUL, Aug. 25 (Korea Bizwire) — The government plans to increase the distribution of electric and hydrogen-powered taxis to 100,000 units by 2025.

To this end, it intends to establish a collaborative venture with municipal governments and related industries.

The Ministry of Environment on Tuesday formed a business agreement with the Seoul Metropolitan Government, the Private Taxi Association, the Corporate Taxi Association, Hyundai Motor Co., Kia Corp., and SK Energy Co. to promote the distribution of non-polluting (electric and hydrogen) taxis.

The agreement aims to reduce emissions of fine dust and greenhouse gases as well as to achieve the carbon neutral goal in the transportation sector by expanding the number of electric and hydrogen-powered taxis in use.

There are currently some 250,000 taxis across the country, of which non-polluting taxis account for a mere 3,000 (all electric taxis).

To this end, the ministry and the Seoul Metropolitan Government plan to provide purchase subsidies for electric and hydrogen-powered taxis as well as to expand related charging infrastructure.

Hyundai and Kia intend to release a wider variety of non-polluting vehicles that can be used as taxis, in addition to the electric vehicles such as the IONIQ 5, EV6, and New Niro that were released this year.