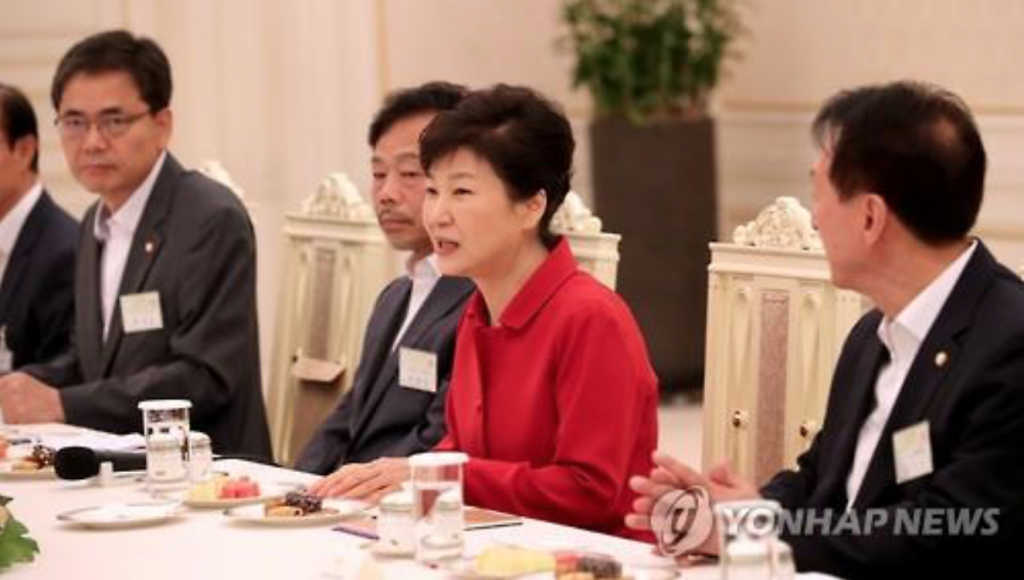 President Park Geun-hye speaks during a meeting with 11 lawmakers of the ruling Saenuri Party on the planned deployment of an advanced U.S. anti-missile system to South Korea at her office Cheong Wa Dae on Aug. 4. (image: Yonhap)

SEOUL, Aug. 4 (Korea Bizwire) – President Park Geun-hye on Thursday said her government can consider deploying an advanced U.S. antimissile system to a new location within the southern county of Seongju rather than an already designated spot, amid strong opposition by residents.

Park made the remarks during a meeting with 11 lawmakers from Daegu and North Gyeongsang Province, including Rep. Yi Wan-young, who represents Seongju.

The meeting was arranged as part of her efforts to address continued opposition by some politicians and citizens to the plan to station a Terminal High Altitude Area Defense (THAAD) battery in Seongju by end-2017.

“In consideration of the concerns among Seongju residents, (the government) will thoroughly review (the possibility of deploying THAAD to) a new location within Seongju, if there are other locations the military can recommend,” the commander-in-chief was quoted by some lawmakers, who participated in the meeting, as saying.

Since Seoul and Washington designated a South Korean artillery unit in Seongju as the site for the deployment of THAAD last month, residents there have vehemently opposed the decision.

The residents fear that THAAD’s powerful radar system could pose health risks and hurt their agricultural crops, and that their hometown could become a military target in case of an armed conflict on the peninsula.

Highlighting the defensive nature of the missile interception system, Park has repeatedly defended the deployment plan as a “self-defense” measure to counter Pyongyang’s evolving nuclear and missile threats.