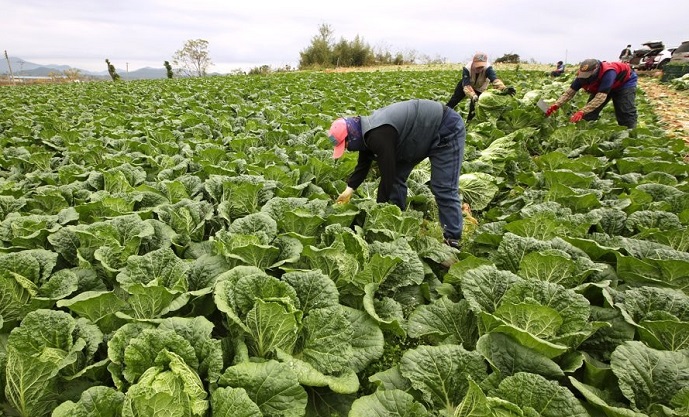 Farmers harvest Chinese cabbages, or “baechu” in Korean, at a field in Haenam, South Jeolla Province, on Nov. 6, 2020, as the season arrives for “gimjang,” or kimchi-making. (Yonhap)

SEOUL, March 2 (Korea Bizwire) — Foreign nationals employed by farms and fisheries will be eligible for health insurance upon arrival in the country, the labor ministry said Tuesday.

The Ministry of Employment and Labor announced a set of measures aimed at improving working conditions of foreigners, jointly with the ministries of health, agriculture, and oceans and fisheries.

The measures come after a foreign national was found dead inside a greenhouse used as makeshift housing in December.

The revision allows foreign nationals to apply for health insurance as soon as they arrive, whereas under current rules, they have to wait six months before applying as a district subscriber, not a job-based subscriber, the ministry said.

The workers do not qualify for job-based insurance because their employers, who are in the fishing and fishing industries, are not registered as businesses.

The revision also gives foreign nationals some of the same benefits as local farmers and fishermen, including up to 50 percent coverage of health insurance premiums, according to the ministry.

Under current rules, foreigners are limited to five changes in five years in the event that employers terminate their contracts.

Although the restriction does not apply to cases of business closures or unfair treatment of workers, concerns have arisen over human rights abuses.

To address the issue, the ministry said it has changed the terms to allow foreign nationals to seek new employment if they are given lodging in greenhouses, suffer an injury that requires at least three months of rest, or experience sexual abuse from coworkers or family members of their employers, in addition to employers themselves.

The government will give six months to farming and fishing businesses that provide foreign workers lodging in greenhouses and other temporary structures to improve their housing conditions.

If they do not comply, their employment permits will be revoked and workers will be allowed to leave for a new job.