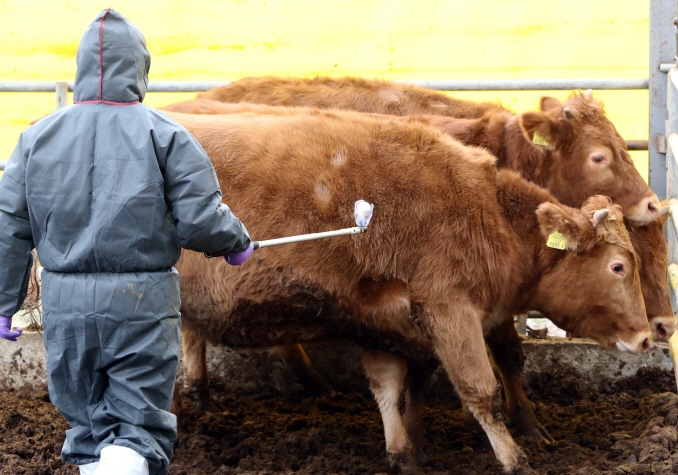 The government banned the travel of people and vehicles from all animal farms throughout the country from Thursday to Saturday. (image: Yonhap)

SEOUL, Feb. 1 (Korea Bizwire) — The government apologized Friday for the recent outbreak of the foot-and-mouth disease (FMD) in the country and vowed to make all-out efforts to tackle the spread of the highly contagious virus.

“We have promptly taken countermeasures including immediate culling and issuing travel regulations as soon as we received reports on suspected FMD cases,” Agricultural Minister Lee Gae-ho said in a statement, claiming the ministry also distributed vaccines to vulnerable regions.

The Ministry of Agriculture, Food and Rural Affairs said tough measures are especially needed as around 30 million South Koreans are expected to travel around the country during the five-day Lunar New Year’s holiday that starts Saturday.

On Thursday, a third case was confirmed in Chungju, 150 kilometers south of Seoul — the first case to be reported outside Gyeonggi Province — sparking concerns over a nationwide outbreak of the disease.

Lee said the FMD infections in the two regions are likely to be related.

“There are now FMD cases in different provinces. As the Lunar New Year holiday starts soon, the government decided to roll out more stringent measures to thoroughly prevent the spread of the disease,” Lee added.

The government issued the second-highest alert in the country’s animal disease control system, which stipulates a travel ban on people and vehicles that are involved in the livestock business where outbreaks have been confirmed.

The government banned the travel of people and vehicles from all animal farms throughout the country from Thursday to Saturday.

During the period, the government plans to carry out disinfection operations at animal farms. All cattle and pig farms will also be shut down for the next three weeks, it added.

The government asked the public not to be too worried about the safety of beef products, including “hanwoo,” a kind of premium Korean beef. Two of the three infections involved hanwoo beef cattle.

” FMD is not a disease that spreads to humans. We have destroyed all infected animals, and they will not be sold in markets,” Lee said, claiming people can eat domestic meat products without any concerns.

The ministry also advised people to refrain from visiting animal farms during their trips over the holiday and asked them to cooperate with disinfection measures.

Meanwhile, another suspected FMD infection was reported at a hanwoo cattle farm in Chungju on Friday.