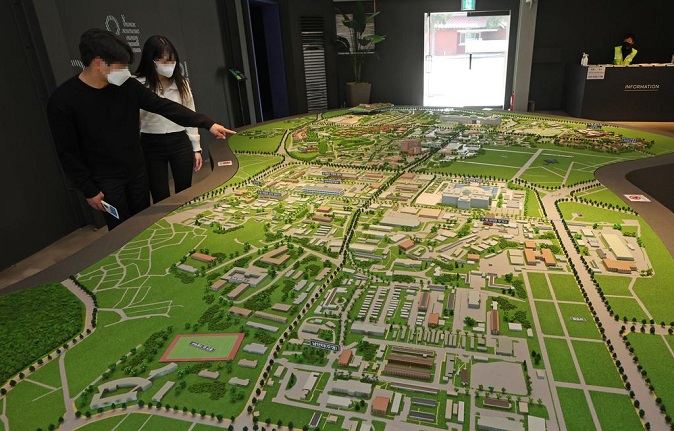 SEOUL, May 20 (Korea Bizwire) — The land ministry on Friday announced its decision to postpone the plan to temporarily open to the public part of the site for an envisioned national park near the presidential office in central Seoul, citing a lack of preparations.

On Thursday, the ministry said it will open part of the site in the Yongsan Garrison in Seoul, including the southern side of the recently relocated presidential office and sports fields north of the National Museum of Korea, for 13 days starting on May 25, and hold various events.

“We’ve decided to defer the plan as inconvenience to visitors is expected due to the lack of preparations, such as convenient facilities,” the ministry said in a release.

“We will hold the opening event after wrapping up preparations to help people enjoy the park more comfortably.”

The U.S. military is in the process of returning the site to the South Korean government after relocating the headquarters of U.S. Forces Korea (USFK) to Camp Humphreys in Pyeongtaek, 70 kilometers south of Seoul, and the government is working to turn it into a large national park, named Yongsan Park.

The ministry earlier said that the planned opening was meant to have people participate in the process of turning the Yongsan base, which has long been off-limits, into an open space, and to better reflect the people’s opinions in the project.

The new Yoon Suk-yeol government relocated the presidential office from Cheong Wa Dae from near the Gwanghwamun area to the defense ministry compound in the Yongsan district in an effort to move out of a “symbol of imperial power” and get closer to the people.

The opposition Democratic Party and environmental groups have criticized the government for the opening decision, claiming that the site used by the USFK is contaminated and the “hasty opening” would pose risks to public health.

But the ministry said the postponement decision has nothing to do with any environmental issues, and the envisioned visits will not do any harm to the public, as visitors are supposed to stay at the site for only about two hours according to its plan.

Seoul and Washington have had consultations on procedures for joint contamination surveys, contamination management criteria and other related issues.