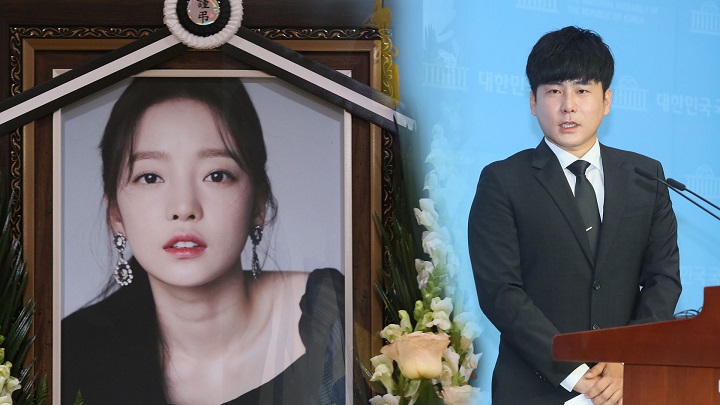 This composite image, provided by Yonhap News TV, shows the portrait of late K-pop singer Goo Ha-ra (L) at her funeral and her brother Goo Ho-in.

The government-proposed civil act revision passed by the Cabinet would allow the court to revoke the automatic inheritance rights of family members who have either seriously neglected their responsibilities of support or are found to have abused or mistreated the bequeathing party.

The ruling can be made at the request of the bequeathing party or their legal representative. The bill is expected to be submitted to the National Assembly for parliamentary approval later this week.

The bill also includes a so-called forgiveness program, which would allow problematic parents to maintain their bequest rights over their children’s wealth when granted forgiveness.

The bill was first proposed in the aftermath of a controversy surrounding Goo Ha-ra, a former member of popular girl group KARA, who took her own life in November 2019.

Following Goo’s death, the singer’s mother, who was reportedly absent throughout Goo’s upbringing, stoked public ire after claiming ownership of half of the late singer’s wealth.

Taking issue with their mother’s move, Goo’s brother has campaigned for the National Assembly to revise the law to block similar parents from inheriting the wealth of their children.

Under the current law, it is virtually impossible to revoke inheritance rights from parents regardless of how little they contributed to their children’s upbringing.