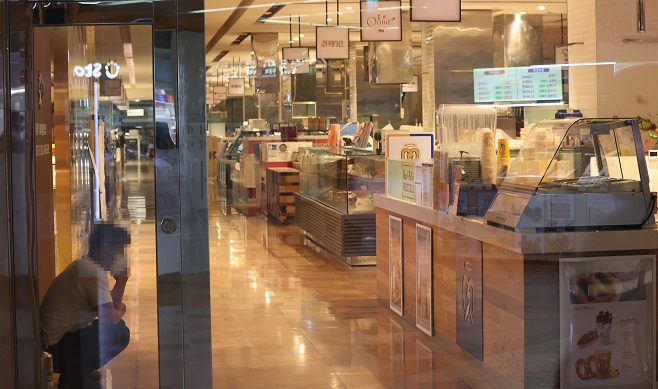 The food court of Lotte Department Store in western Seoul is closed on July 11, 2021, after one of its workers tested positive for COVID-19. (Yonhap)

SEOUL, July 27 (Korea Bizwire) — Retails sales in South Korea rose 12 percent in the first half of 2021 from a year earlier, data showed Tuesday, as consumers were fatigued by the prolonged COVID-19 pandemic and became less reluctant to visit supermarkets and department stores.

The combined sales of 25 major offline and online retailers reached 75 trillion won (US$64.9 billion) over the January-June period, up from 67 trillion won posted in 2020, according to the Ministry of Trade, Industry and Energy.

The rebound mainly came on a lower base effect, as South Koreans refrained from going outside at the early stage of the pandemic last year.

Sales from offline stores advanced 8.6 percent on-year in the first half, led mostly by department stores whose revenue shot up 26.2 percent.

Supermarkets also saw their sales edge up 0.3 percent on-year, and those from convenience stores gained 6.2 percent as well.

Online stores continued to gain ground as well, with their sales jumping 16.1 percent over the period as people purchased more groceries.

By sector, online sales of foodstuffs jumped 27 percent on-year in the first half, with revenue from the service sector also increasing 40.4 percent as more people enjoyed food delivery amid the pandemic.

In June, the offline sector’s sales advanced 4.8 percent on-year, and those of the online stores moved up 19.6 percent, leading to the overall growth of 11.4 percent, the data also showed.

Sales from offline stores, however, may lose ground down the road as South Korea adopted tougher social distancing measures amid the fourth wave of the pandemic, coupled with the growing concerns over the more contagious delta variant.

Gatherings of more than two people are currently banned after 6 p.m. in the greater Seoul area, home to half of the country’s 51.3 million population.

The country decided to enforce Level 3 distancing restrictions in the non-capital areas from Tuesday until Aug. 8 to better contain the virus during the summer holiday season, in which private gatherings of more than five are banned.