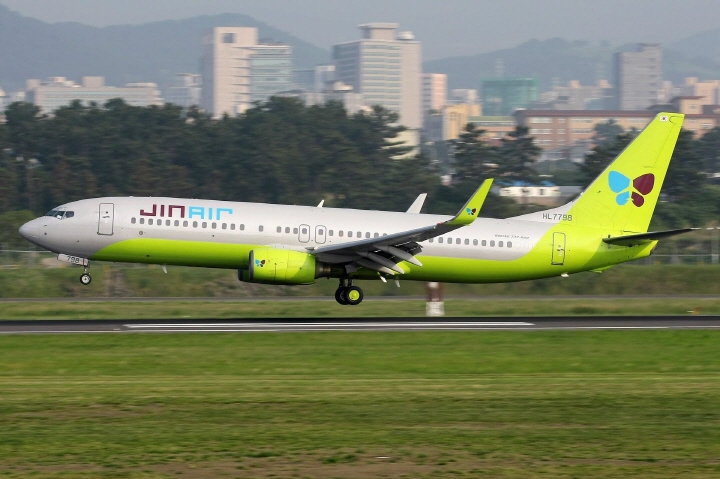 The Ministry of Land, Infrastructure and Transport has also allowed the budget carrier to register new airplanes and to provide non-regular flights.

Jin Air welcomed the ministry’s decision. “The decision is a relief for the airline, which faces an unprecedented crisis caused by the rapidly spreading coronavirus outbreak,” a company spokesman said.

However, the move is unlikely to give any immediate boost to Jin Air. The company has suspended all of its flights on international routes, as an increasing number of countries have closed their borders to contain the COVID-19 pandemic.

In 2018, the ministry imposed the restrictions on the low-cost carrier affiliate of Korean Air Lines Co. over its illegal appointment of a foreign national to its board of directors.

Under the aviation law here, only South Koreans can be registered as a director of an airline.

Jin Air, however, appointed Cho Hyun-min, an American citizen and the younger sister of Korean Air Chairman Cho Won-tae, to serve as a board member of Jin Air between 2010 and 2016.

Cho Hyun-min was the subject of a probe for allegedly throwing water at an ad agency manager during a meeting in March 2018.

She is the younger sister of Cho Hyun-ah, who gained global notoriety for the “nut rage” incident in 2014.

Cho Hyun-ah forced a plane to return to the boarding gate at New York’s John F. Kennedy International Airport because she was upset with the way her nuts were served — in an unopened bag instead of on a plate.

In 2018, Cho Hyun-ah and Cho Hyun-min were both dismissed from their senior positions at logistics-to-airline conglomerate Hanjin Group amid public outcry about Hyun-min’s behavior and the controlling family of Korean Air.

Last year, Cho Hyun-min made a comeback as the chief marketing officer of the group’s holding company.

Jin Air has since increased its number of outside directors from four to five, now accounting for 57 percent of the board members, in a move to improve its corporate governance.

The carrier also appointed one of the outside directors, not the company’s president, as the board’s chairman, and set up a governance committee that focuses on improving shareholder value.

Jin Air said it will establish an independent, transparent and trusted management structure.