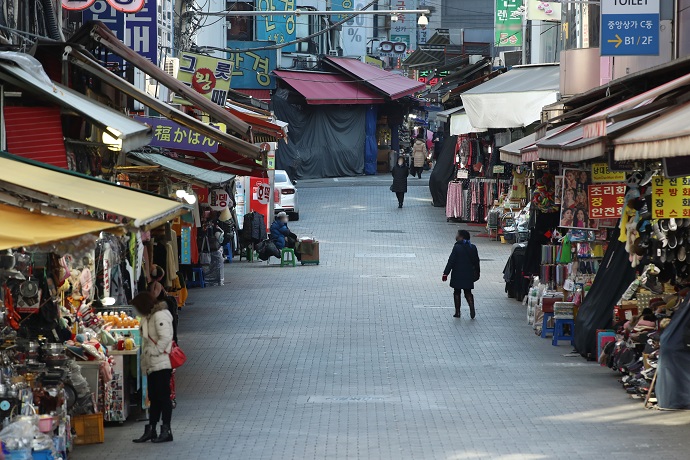 This photo, taken on Dec. 17, 2020, shows almost no people at Namdaemun Market in central Seoul, one of South Korea’s biggest traditional markets, amid the new coronavirus outbreak. (Yonhap)

The decision on the country’s third round of emergency relief package was reached during a high-level policy discussion between officials from Cheong Wa Dae, the government and the ruling party at the National Assembly.

The government’s goal is to provide the relief grants within January.

The move comes as more small merchants and self-employed people are facing the growing burden of paying fixed rent fees amid government orders to suspend their businesses to curb the spread of community transmissions.

The government will also provide low-interest loans to small businesses and allow deferrals of electricity and insurance bills of store owners from January to March.

The government also plans to offer support for medical institutions dealing with the pandemic.

The ruling party and the government also decided to raise the amount of tax credits offered to landlords who voluntarily reduce rents for small businesses, from the current 50 percent to up to 70 percent for the corresponding discounted amount.

The program will not apply universally to all landlords but only to those with incomes “under a certain level.”

The government will also offer grants to contract workers and freelancers in the new relief program. Such workers were eligible to receive 500,000 won in emergency funds in the government’s fourth supplementary budget passed earlier this year.