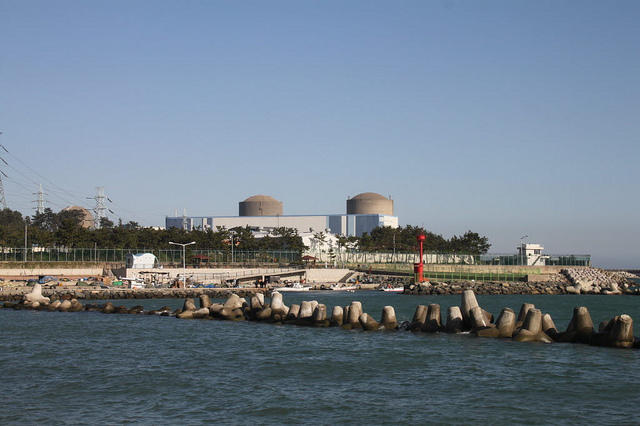 The country currently operates 23 nuclear reactors while 11 others are or will soon be under construction. (image: Energ Justice Actions/flickr)

SEJONG, June 8 (Korea Bizwire) — The government on Monday proposed the construction of two new nuclear reactors over the next 15 years in an effort to help cut the country’s emission of greenhouse gases.

The so-called basic plan for power supply calls for building the two nuclear reactors by 2029, bringing the total number of nuclear reactors here to 36, according to the Ministry of Trade, Industry and Energy.

The basic plan is devised every two years to set the mixture of the country’s power sources. The latest plan, the seventh of its kind, was submitted to the National Assembly. It is expected to be finalized before the end of the month following a parliamentary review.

“The seventh basic plan on power supply places priority on setting up a mixture of energy sources that can minimize greenhouse gas emissions by building two new nuclear reactors for a stable supply of power while withdrawing earlier plans for coal-generated power plants,” the ministry said in a press release.

The country currently operates 23 nuclear reactors while 11 others are or will soon be under construction.

Such estimates, however, reflect an aggressive government plan to cut the country’s annual use of electricity and peak demand by 14.3 percent and 12 percent, respectively, from their business-as-usual levels in 2029.

“The seventh basic plan on power supply contains the most aggressive measures the country can take to reduce its greenhouse gas emissions in line with its Post 2020 Climate Change Mitigation Commitments,” the ministry said.

The post-2020 regime is a new international agreement sought by the United Nations that will set each of its member’s own commitments to cutting greenhouse gas emissions.

South Korea is expected to submit its own report before the end of September.

The government has yet to reveal its voluntary commitments, but the latest energy plan suggests the country boost its use of clean and renewable energy, such as wind and solar power, by at least five times to 32,890 MW, in terms of generation capacity, in 2029.

It also calls for the withdrawal of plans for at least four coal-fired power plants under the sixth power supply basic plan to help further reduce the country’s greenhouse gas emissions.

With the proposed changes in the country’s power sources, nuclear power plants will account for 28.5 percent of the country’s overall power supply, in terms of generation capacity, in 2029.

The figure compares with 27.4 percent under the sixth basic plan announced two years ago.

The proportion of fossil-fuel power plants, on the other hand, will be lowered from 34.7 percent to 32.2 percent, while that of clean, renewable energy sources will rise from 4.5 percent to 4.6 percent, the ministry said.