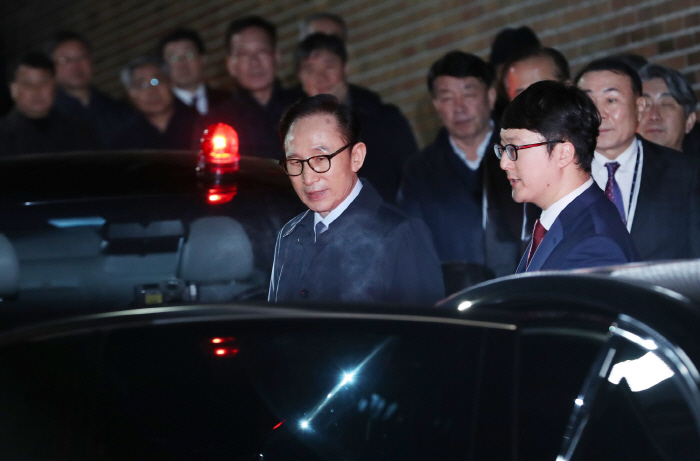 Former President Lee Myung-bak is escorted by prosecution officials from his house to a vehicle that will take him to a Seoul detention center on March 23, 2018. (image: Yonhap)

SEOUL, Mar. 23 (Korea Bizwire) — Former President Lee Myung-bak spent the early hours of Friday alone in a cell at a Seoul detention center after his arrest on corruption charges.

Late Thursday night, a Seoul court approved an arrest warrant for Lee on charges that include bribery, embezzlement, tax evasion and abuse of power.

He allegedly took more than 11 billion won (US$10.2 million) in bribes from the state spy agency and businesses. He is also suspected of embezzling about 35 billion won from a company that he is said to secretly own.

If convicted on all charges, he could face up to 45 years in prison.

The disgraced former leader was taken to the Seoul Eastern Detention Center just after midnight. He went through the same admission procedure as other inmates, the Ministry of Justice said.

He will be treated in accordance with the law regarding respectful treatment of ex-presidents, it added.

Lee’s cell is 13.07 square meters, large enough to accommodate six to seven regular inmates. It has a bathroom, TV, sink and basic furniture, such as a desk and a mirror.

He will be provided with the same meals as other inmates and has to do the dishes and return them himself.

Lee is said to have spent a sleepless first night in the cell. For breakfast, he was given a bun, jam, soy milk and a cabbage salad. It was not immediately known if, or how much, he ate.

Prosecutors said they have no plan to question him Friday to give him some time to rest.

Prosecutors have up to 20 days to hold Lee in custody before formally charging him. Lee’s detention will expire on April 10.