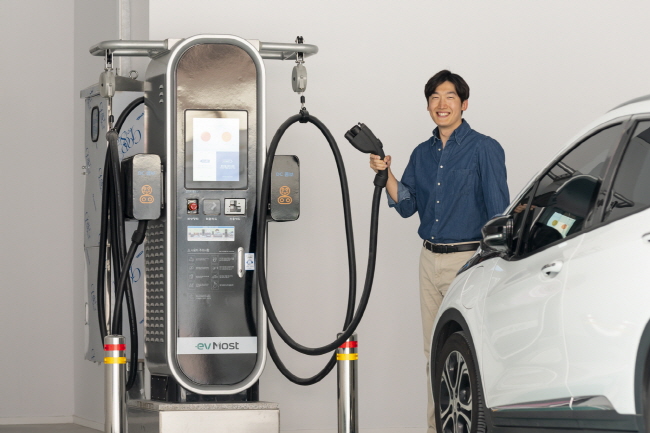 The Testival will address various problems related to recharging EVs through compatibility tests between vehicles and new models of 100kw chargers that are being installed across the country. (image: SK Networks Co.)

SEOUL, Sept. 2 (Korea Bizwire) — The government plans to develop standards to prevent data error between an electric vehicle (EV) and a recharging station as new technology has enabled a single charger to recharge two EVs simultaneously.

The Korean Agency for Technology and Standards (KATS) will hold the 2019 Electric Vehicle Interoperability Testival, a portmanteau of the terms test and festival, jointly with the Korea Smart Grid Association, the Korea Electrotechnology Research Institute (KERI), and manufacturers to improve interoperability between EVs and charging stations.

The Testival, to be held this week at KERI located in Ansan, Gyeonggi Province, will address various problems related to recharging EVs through compatibility tests between vehicles and new models of 100kw chargers that are being installed across the country.

These chargers are capable of charging two EVs simultaneously, which requires verification in terms of their interoperability.

The problem lies in differences of compatibility standards among chargers produced by various manufacturers during the process of exchanging recharging data based on international communications standard through the connectors that link EVs and the charger, which may result in data connection failures that interfere with the recharging process.

Commercial EVs including Hyundai Motor’s Ionic and Kia Motors’ Soul along with three upcoming models will go through verification tests during the Testival.