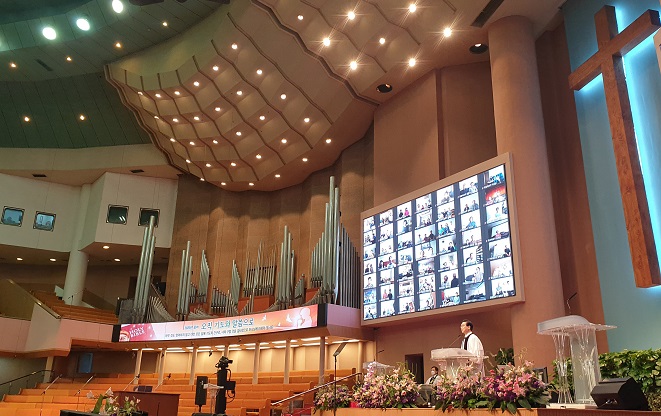 Yoido Full Gospel Church holds an online service on Sept. 13, 2020 in this photo provided by the church.

SEOUL, Sept. 18 (Korea Bizwire) — The government and the religious community have agreed to ease restrictions on in-person services of large churches starting this weekend, in line with a nationwide lowering of social distancing guidelines over COVID-19, officials said Friday.

All in-person religious events and chapel services in Seoul and its surrounding areas have been prohibited since mid-August amid a recent resurgence in new virus cases being largely linked to Protestant church gatherings.

Exceptionally, large churches with more than 300 seats have been allowed to hold services with attendance of fewer than 20 to produce footage for online worship.

A consultative body of the government and seven religions, including Protestantism, Buddhism and Catholicism, recently discussed raising the in-person attendance ceiling of large churches, from 20 to 50 starting this Sunday, according to officials familiar with the matter.

Under the eased guidelines, around 10-20 percent of nearly 25,000 Protestant churches in the Seoul metropolitan area would benefit from the eased restriction, officials said.

Starting from this week, South Korea lowered the nation’s social distancing scheme from Level 2.5 down to Level 2 as the growth in the number of daily new virus cases, while still in the triple digit range, has shown a stable downward trajectory.