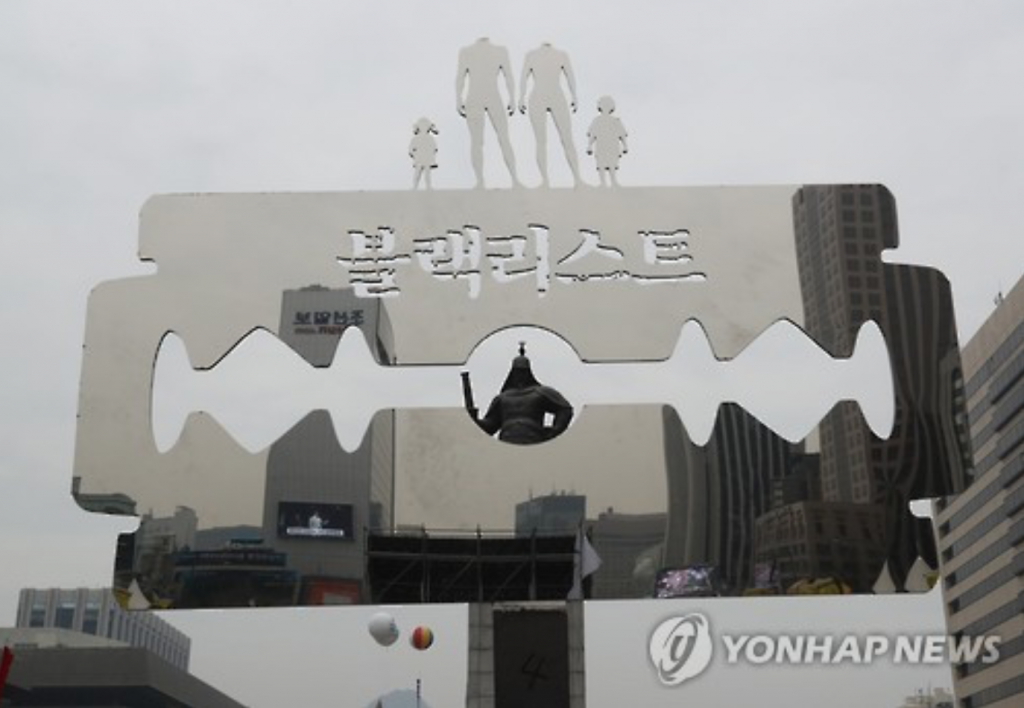 A huge razor blade installment set up at Seoul’s Gwanghwamun Square on Feb. 4, 2017, by protesters of the government blacklisting of artists. The words in the middle read “blacklist” in Korean. (image: Yonhap)

SEOUL, March 9 (Korea Bizwire) – The culture ministry said Thursday it will enact a bill aimed at protecting artists from political oppression and censorship as part of measures to prevent any future blacklisting of artists critical of the government.

Any act that violates artistic freedom and discriminates against artists for political reasons will be strictly punished under the law that will be proposed in the first half of this year, the Ministry of Culture, Sports and Tourism said.

The plan came after the former presidential chief of staff Kim Ki-choon and ex-culture minister Cho Yoon-sun were indicted early this year for masterminding the creation of a “blacklist” of nearly 10,000 artists who had voiced criticism of now-impeached President Park Geun-hye. The blacklisted artists were barred from receiving state funding or support.

The ministry will also insert a new clause into the code of conduct for cultural ministry officials to protect officials from being punished for rejecting unjust instructions from their superiors.

The two agencies have come under fire for taking the role of enforcing the blacklist, yielding to political pressure from the government.

In addition, the ministry will restore unjustly scrapped or reformed support programs in the fields of literature, theatrical play and film under the current government and create five new programs to support local publishing and performing arts. For this, the ministry earmarked 8.5 billion won (US$7.3 million) from its budget for this year.

“What was announced today is a basic plan for this, and we’ll develop it later through discussions with artists in the scene,” he said.