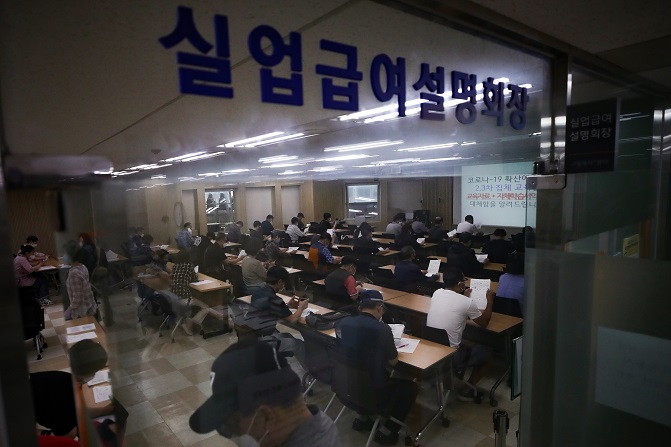 This photo, taken on June 10, 2020, shows people attending an orientation on unemployment benefits at an employment help center in central Seoul. (Yonhap)

Earlier this week, Moon announced plans to invest 160 trillion won (US$133 billion) by 2025 to create 1.9 million jobs under the Korean version of the New Deal.

He described it as a campaign for the “grand transformation” of the nation in preparation for the post-coronavirus era.

In the labor market, the government plans to expand employment insurance to more workers, including artists and people who are hired under special contracts.

These workers are regarded as being in a “blind spot” as they are not directly employed by companies and are not covered by employment insurance.

The National Assembly has approved a bill to revise the current legislation to include artists and the government is pushing to expand this to special contract workers, such as delivery workers, insurance agents and caregivers.

As part of the initiative, the government also plans to expand state work injury insurance to more workers on special contracts.

The New Deal also includes fostering IT-related jobs for young job seekers amid grim outlooks for the economy and the job market in Asia’s fourth-largest economy.

Under the plan, the government plans to provide financial support to small and mid-sized companies that hire young people for IT-related positions.