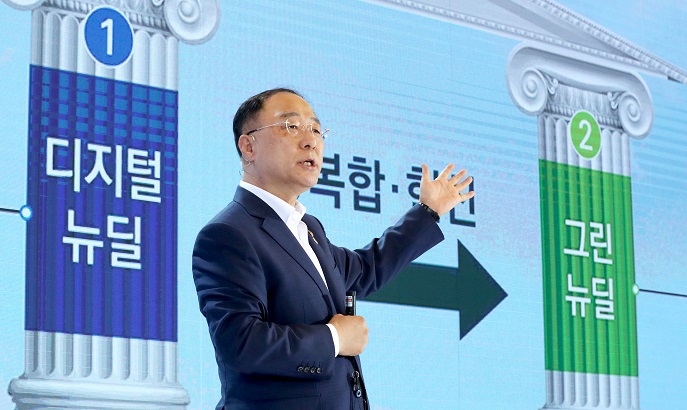 Hong unveiled what the government calls “Digital and Green New Deals” following a meeting of Cabinet ministers to stimulate Asia’s fourth-largest economy, which was presided over by President Moon Jae-in.

Unlike conventional infrastructure projects, the deals feature 28 projects that will transform the nation’s fossil fuel-reliant economy into an eco-friendly one and increase state investment in artificial intelligence and fifth-generation (5G) telecommunication services, Hong said.

The projects are aimed at laying the groundwork for economic growth in the long term, while cushioning the economic blow from the pandemic and hastening an economic recovery, Hong said.

“The Korean New Deal is a national development strategy to overcome the COVID-19 crisis and lead the global economy once the crisis wanes,” Hong said.

The remaining 20.7 trillion won will be funded by the private sector, Hong said.

Although the projects will be mainly led by government funds, Hong said the government will reform regulations to encourage private companies to join the projects.

The projects are designed as a “pacesetting program to transform the nation into an eco-friendly society and a long-term investment program to nurture talented people,” Hong said.

Under the project, the government will also build nationwide 5G networks and train 100,000 professionals in artificial intelligence. Wireless internet networks will be built in remote areas. 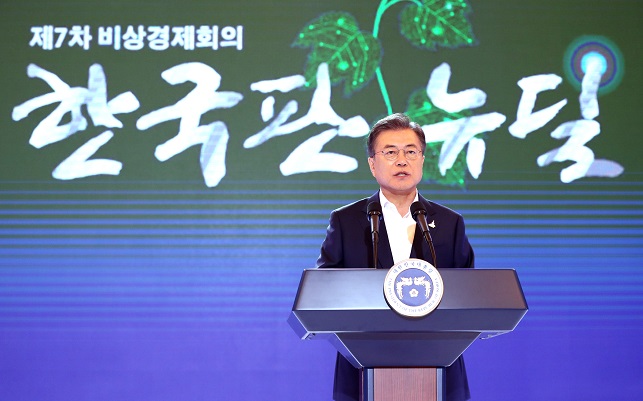 President Moon Jae-in delivers a speech during an event at Cheong Wa Dae in Seoul on July 14, 2020, to make public details of the Korean version of the New Deal project. (Yonhap)

The government will spend 73.4 trillion won on eco-friendly projects, including the provision of 230,000 energy-saving homes and public buildings and the supply of 1.13 million electric cars.

To strengthen social safety nets, the government will invest 28.4 trillion won by 2025.

Under the plan, the number of employment insurance subscribers will be raised to 21 million by 2025 from 13.67 million last year, Hong said.

Freelance and other part-time workers will gradually benefit from the employment insurance program, Hong said.

The finance ministry has expected the economy to grow 0.1 percent this year, a sharp downgrade from a 2.4 percent expansion it had forecast last December.

That was a more upbeat assessment than that of the Bank of Korea, which projected the economy to contract 0.2 percent this year.

The nation’s economy shrank 1.3 percent on-quarter in the first quarter of this year, marking the sharpest quarterly contraction since the last three months of 2008.

South Korea has pledged stimulus packages worth 270 trillion won, or 15 percent of its gross domestic product, to help minimize the economic impact from the pandemic.