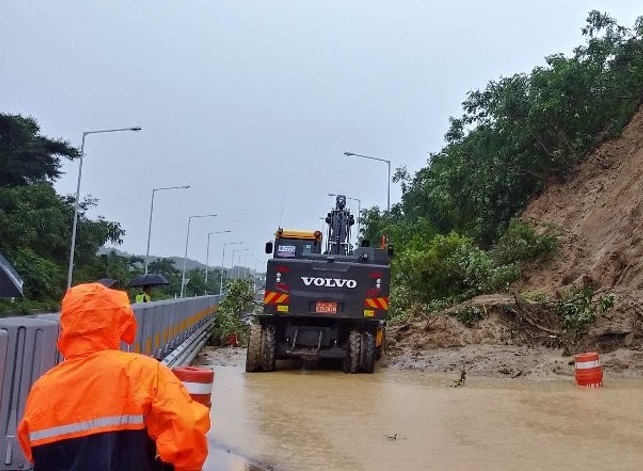 Emergency workers use an excavator to clear mud and other debris caused by a landslide that blocked a road in Goseong County, 200 kilometers east of Seoul, on Aug. 5, 2020, in this photo provided by the Gangwon Province country.

SEOUL, July 1 (Korea Bizwire) — The National Assembly cleared the way for the government to pay compensation in cases when injury or a loss of life occurs due to road debris or objects falling from cars.

In addition, for accidents caused by drunk, unlicensed or hit-and-run drivers, insurance companies are now allowed to exercise the right of reimbursement against such drivers for 100 percent of the money paid out to victims.

The Ministry of Land, Infrastructure and Transport announced on Thursday that the revision of the Automobile Damage Compensation Guarantee Law passed in the National Assembly.

The revised law clears the way for the insurance companies to exercise the right of reimbursement for accidents caused by drunk, unlicensed or hit-and-run drivers.

When it comes to accidents caused by road debris, it is difficult to find the vehicles that cause such accidents. Thus far, accordingly, the victims of the accidents have had to bear the costs of the damage themselves.

Taking these situations into consideration, the revised law stipulates that cases in which injuries or a loss of life occur due to objects falling from unidentified cars should be included in the government scheme to ensure proper compensation for the victims.