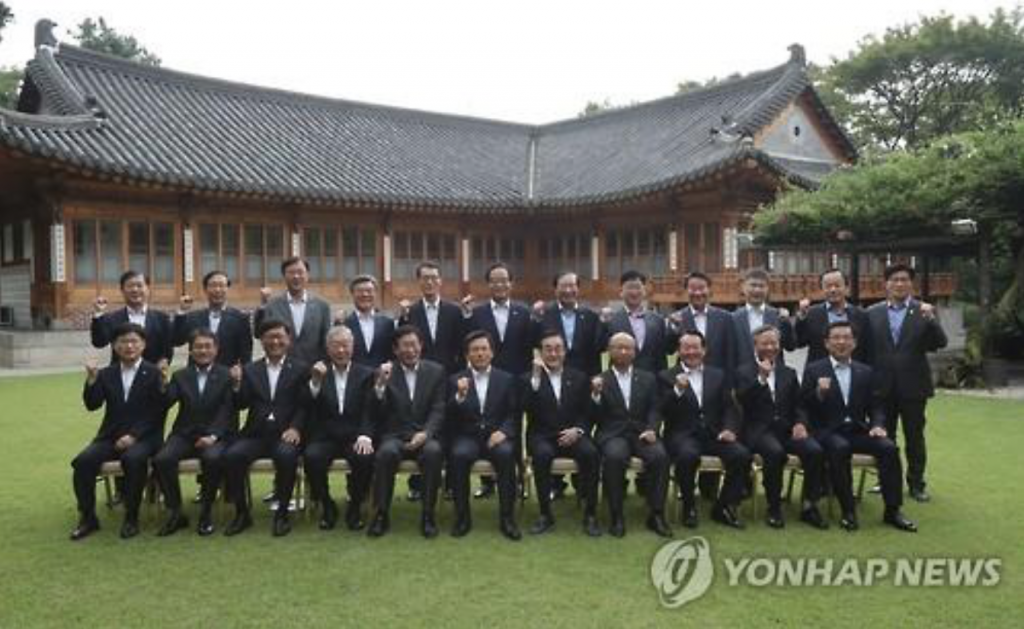 Prime Minister Hwang Kyo-ahn (C in front row) poses with CEOs of well-managed public corporations during their meeting at the prime minister’s residence in central Seoul on Sept. 1, 2016. (image: Yonhap)

SEJONG, Sept. 1 (Korea Bizwire) – The South Korean government will reduce the debt ratio of public corporations to around 150 percent by 2020 as part of its efforts to improve the balance sheets of state-funded agencies, the finance ministry said Thursday.

Under a long-term financial management plan, 39 public firms, including the Korea Gas Corp. (KOGAS) and the Korea Electric Power Corp., are required to maintain their debt-to-total asset ratio at an average 151 percent from the current 194 percent in the coming five years, with their total debt hovering around 490 trillion won (US$439.1 billion), according to the Ministry of Strategy and Finance.

The South Korean government has been making constant efforts to cut the debt ratio of such state-run companies, which peaked at 235 percent in 2012 amid an overseas resources development boom led by the preceding administration.

The finance ministry said the top five companies on the debt list will be on the front burner for the government-led debt management efforts as the combined debt of the five heavyweights accounted for 58 percent of the entire public liability.

“The plan includes public organizations’ overhauling efforts like asset sales, reorganization and downsizing,” the finance ministry said. “The government will make constant efforts to have them improve their balance sheets, but at the same time, they will keep pushing forward with making investments into public projects and services.”