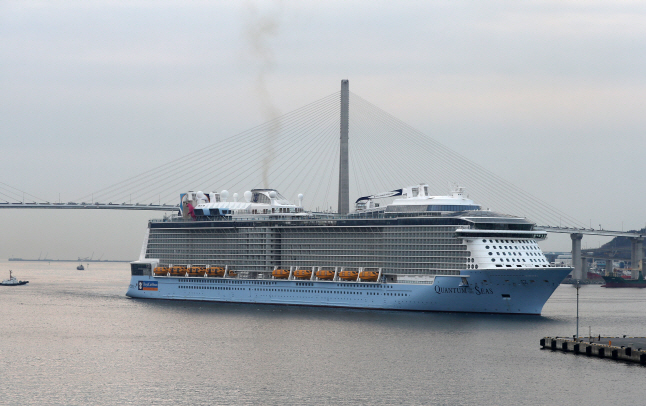 The Quantum of the Seas enters an international ferry terminal in Busan on April 3, 2020. (Yonhap)

BUSAN, April 3 (Korea Bizwire) — An extra-large cruise ship, long stranded in international waters without passengers amid the global outbreak of the new coronavirus, made a call at the South Korean southern port of Busan on Friday to refuel and restock, the port operator said.

The Quantum of the Seas, the largest cruise ship plying Northeast Asia, arrived at the Busan Port International Passenger Terminal in the city, 450 kilometers southeast of Seoul, at around 7 a.m., according to the terminal operator Busan Port Authority (BPA).

The 167,000-ton ship operated by Royal Caribbean International has been staying in the high seas with only 1,200 crew members aboard, as passenger cruise services have been suspended across Asia due to the COVID-19 pandemic.

The ship had requested the rare port call to refuel and restock food and other supplies for its crew members.

After consulting quarantine authorities, the BPA permitted the vessel’s docking on condition that the crew do not disembark, and fuel, food, water and other supplies, worth 600 million won (US$488,000), are handed over without close human contact.

All the supplies were first transported by domestic providers onto a terminal pier before being forklifted onto the vessel via its side entrance. 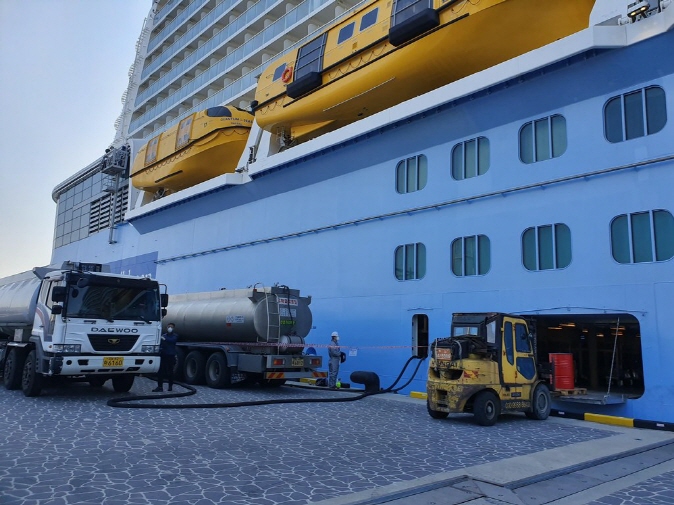 Fuel and ship supplies are provided to the Quantum of the Seas cruise ship at a port in Busan on April 3, 2020. (image: Busan Port Authority)

The inspection process for checking items and quantities was also conducted via email, without people meeting one another, BPA officials said.

In the past, the staff from local providers would go aboard visiting ships to check supplies and obtain signatures.

The Quantum of the Seas had asked to stay in Busan for two days, but the BPA did not accept the request, considering concerns about cruise ships. Therefore, the ship is set to depart Friday night after refueling and restocking.

On Feb. 10, the South Korean government announced a temporary entry ban on international cruise ships to help contain the coronavirus outbreak amid concerns that luxury liners may be vulnerable to the highly contagious virus, as passengers and crew members spend days or weeks together in a confined space.

Despite the entry ban, the government has permitted port calls of cruise ships for refueling and restocking on condition that passengers and crew members do not disembark.

South Korea’s confirmed coronavirus cases totaled 10,062 as of Friday, with a daily increase of 86.