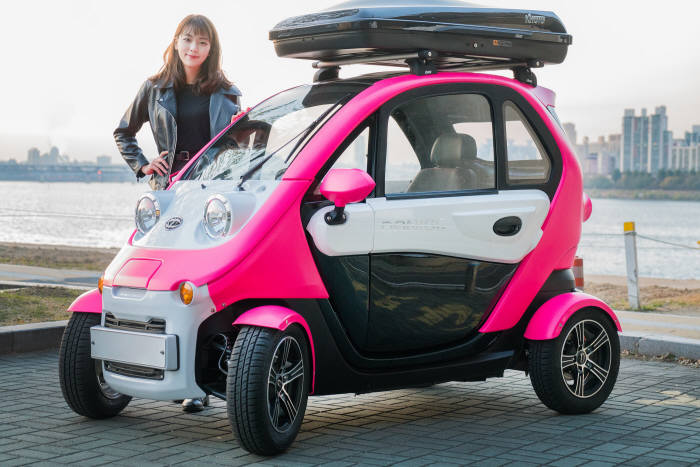 SEJONG, Apr. 9 (Korea Bizwire) — South Korea will officially give ultra compact cars their own classification and promote their production through various incentives, the government said Sunday.

The Ministry of Land, Infrastructure and Transport said it will revise the country’s motor vehicle management act and make the necessary preannouncement of legislation on May 15.

Under this system, micro vehicles like French automaker Renault S.A.’s Twizy and Daechang Motor Co.’s Danigo were all lumped together with city or mini cars that is the category given to vehicles with an engine capacity smaller than 1,000 cubic centimeters and length, width and height being smaller than 3.6 meters, 1.6 meters and 2 meters, respectively.

Industry watchers have said such dimensions and power output do not fit the ultra compact, which are much smaller and are considered heavy quadricycles in places like Europe. These cars cannot seat two people side-by-side like conventional cars.

The new ultra compact car classification, that will be a subdivision of the city car category, calls for vehicles that have less than 250 cc of internal combustion engines or with 15 kilowatts of electric power and weigh 600 kilograms or less. Such cars can have the same length and height of city cars yet are less than 1.5 m in width and have a maximum speed set at 80 kph.

The ministry said that safety reviews of such cars that slot between motorcycles and passenger cars are under way. It added such vehicles can carry one or two people, as well as cargo.

The cargo version can weigh 750 kg and haul at least 100 kg of freight.

“Once all the administrative processes are completed, carmakers can start making such vehicles in earnest and tap into the new market,” a government official said.

He said to encourage companies to make ultra compact vehicles, the government can opt to give favorable tax rates, lower insurance premiums for owners and provide other perks, such as lower parking fees and toll rates.

The official added despite having many advantages, such cars will be barred from using highways and non-pedestrian motorways for safety reasons, adding that rules linked to such cars that are now deemed as being outdated will be fixed in the coming months.