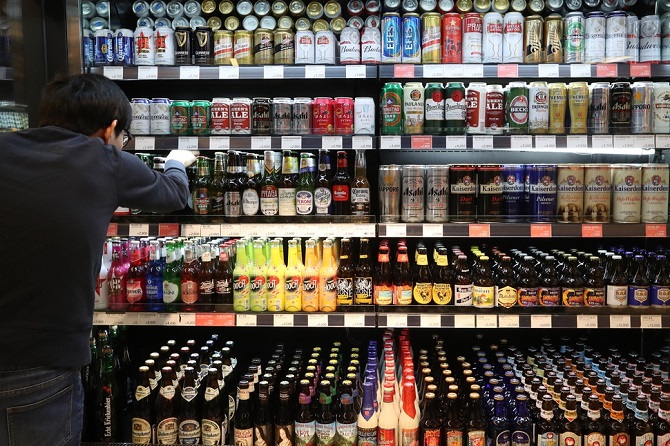 Several types of beers are displayed at a store in Seoul. (Yonhap)

SEOUL, Nov. 16 (Korea Bizwire) – South Korea’s alcohol imports fell for the first time in 10 years in 2019 amid a boycott of Japanese beer due to a bilateral trade row, data showed Monday.

South Korea’s liquor imports came to 466,000 kiloliters in 2019, down 6 percent from the previous year, according to the data from the Korea Customs Service and the local alcohol industry.

It represents the first on-year decrease since 2009, shortly after the global financial crisis.

Last year’s decline was attributed mainly to a fall in imports of beer, especially from Japan. South Korea’s beer imports stood at 356,000 kiloliters last year, down 8.7 percent from a year earlier.

Japanese beer brands had topped the bestselling list in the domestic market, but they were replaced by products from China and Belgium in the wake of the boycott of Japanese goods among South Korean consumers.

“The boycott of Japanese goods was surely the prime culprit for the decline in last year’s beer imports,” an industry source said on condition of anonymity. “Japanese brands dropped out of the leading spots on the bestselling list due to the boycott.”

In July last year, South Koreans launched the boycott in protest of Japan’s export restrictions of some key industrial materials to South Korea.

Tokyo made the move as the top court in South Korea ordered Japanese firms to compensate Korean victims of Japan’s wartime forced labor in 2018.

Imports of whisky, which had been the most popular imported liquor in the country, continued their downturn last year following the implementation of the country’s draconian anti-graft law in 2016 and a 52-hour workweek in 2018.