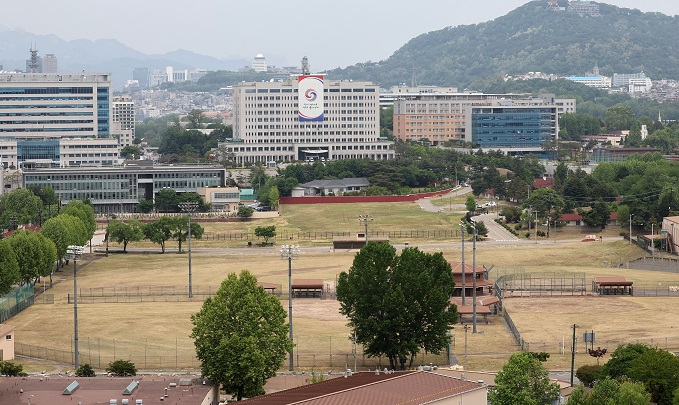 This photo, taken on May 19, 2022, shows part of the site for an envisioned national park near the presidential office in Seoul’s Yongsan district. (Yonhap)

SEOUL, June 2 (Korea Bizwire) — The land ministry said Thursday it plans to temporarily open to the public part of the site for an envisioned national park near the presidential office in central Seoul starting next week.

Part of the site in Yongsan — once used as a garrison for the U.S. Forces Korea (USFK) — will be available for visitors for 10 days starting on June 10, which will include the southern side of the recently relocated presidential office and sports fields north of the National Museum of Korea, according to the Ministry of Land, Infrastructure and Transport.

South Korea is working to turn the Yongsan Garrison site into a large national park, named Yongsan Park, as the U.S. military is in the process of returning the base to the Seoul government following the relocation of its headquarters to Camp Humphreys in Pyeongtaek, 70 kilometers south of Seoul.

Initially, the ministry planned to open the site in May, but postponed the decision due to the lack of preparations. It has since installed more facilities there to boost public convenience, such as benches, sun shelters and cafes, according to its officials.

The envisioned opening is meant to have people participate in the process of turning the Yongsan base, which has long been off-limits, into an open space, according to the ministry.

The new Yoon Suk-yeol government relocated the presidential office from Cheong Wa Dae to the defense ministry compound in the Yongsan district in an effort to move out of a “symbol of imperial power” and get closer to the people.

Visitors should make online reservations in advance, and up to 500 people can visit the site per two-hour time slot and 2,500 per day

Citizens can also tour the front yard of the presidential office, and various events to celebrate the return of the site will be held, according to the ministry.

“We will enhance communication with the people and actively accept their opinion over the course of the park construction project to let them feel that the Yongsan park is really owned by them in about 120 years,” Land Minister Won Hee-ryong said.

The area has been marked off since 1904, when Japan stationed its troops in Yongsan during the Russo-Japanese War. Yongsan had been home to the U.S. military headquarters following Korea’s liberation from Japan’s 1910-1945 colonial rule.