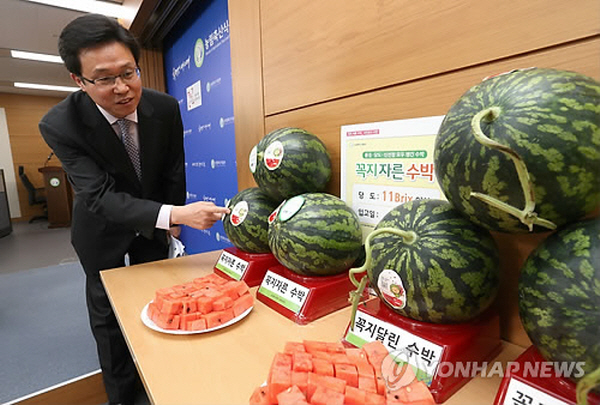 SEJONG, Apr. 15 (Korea Bizwire) – The Korean government will promote the distribution of watermelons whose stems are cut-off during harvesting, said the Ministry of Agriculture, Food and Rural Affairs (MAFRA) on April 14.

Watermelon stems have been a conventional indicator of the quality and the freshness of watermelons for Koreans, who have created a unique custom of placing lower value on watermelons with damaged stems.

However, studies have shown that the shape or size of watermelon stems do not correlate to any difference in density, sweetness and pulp. Furthermore, advanced agricultural facilities already guarantee the high quality of watermelons distributed in Korea.

Trimming stem ends in an esthetically pleasing way burdens farmers with extra work. Watermelons whose stems fall off during distribution sell for half of the normal price.

Due to the groundless belief, farmers have to worry about watermelons with damaged stems, which happen to account for five to seven percent of the total watermelons distributed on a yearly basis.

The ministry will first let six distribution centers in and around Seoul sell a total of 120 tons of watermelons with no stems in a trial sale. Another 4,600 tons of such watermelons will be distributed from May to August this year.