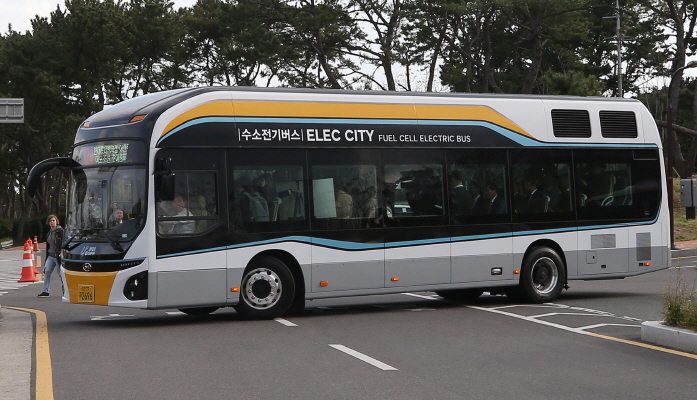 A hydrogen-powered bus which began service as a pilot project in Ulsan. (Yonhap)

SEOUL, Mar. 7 (Korea Bizwire) — South Korea is aiming to have 2,000 hydrogen fuel-cell electric buses in the country by 2022 as it strives to raise the ratio of environment-friendly vehicles, the transport ministry said Thursday.

This year, the government is initially targeting the replacement of 35 existing buses with fuel cell electric vehicles (FCEV). It plans to provide subsidies to bus companies which use hydrogen buses, the Ministry of Land, Infrastructure and Transport said in a statement.

The hydrogen buses will be available in seven major cities — Seoul, Busan, Ulsan, Gwangju, Changwon, Asan and Seosan — in 2019, it said.

“The public transportation sector is a good place to introduce hydrogen vehicles as the resource has the potential to become the next-generation fuel for large commercial vehicles, such as buses and construction equipment, with good fuel efficiency,” Kang Ju-yeob, an official in charge of hydrogen vehicle policies at the ministry, said over the phone.

For FCEV to become more widespread, there is a critical need to greatly expand the charging infrastructure, he said.

“To meet such goals, the government plans to establish hydrogen charging facilities in major bus garages this year,” Kang said.

About 900 Nexo hydrogen passenger cars made by Hyundai Motor Co. have been sold across the country, he said.