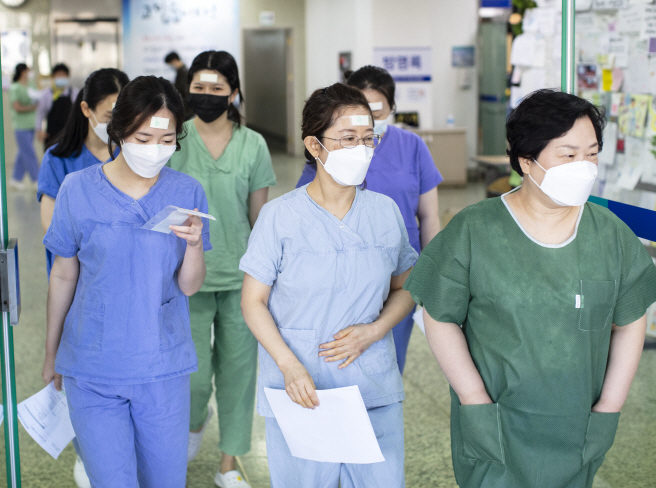 Nurses at Dongsan Hospital in virus-hit Daegu are in a line to put on protective gear before their shift on March 16, 2020. (Yonhap)

GYEONGSAN, March 17 (Korea Bizwire) — An elderly coronavirus patient managed to fully recover thanks to care from medical staff, and her grandson.

Kim Gap-saeng, a 85-year-old woman in Cheongdo County, North Gyeongsang Province, tested positive for the coronavirus on Feb. 28 and was transferred to Pohang Medical Hospital.

She fully recovered and was discharged last Saturday.

Park Yong-ha, her 31-year old grandson, was the sole family member living with her. He has been caring for his grandmother who has been suffering from dementia.

When she was infected with the coronavirus, Park decided to stay with her if he had to engage in self-quarantine anyways.

For Park, his grandmother was as dear to him as his mother. For his whole life, Park was raised by his grandmother, after a fatal car accident took the lives of both of his parents.

Park joined his grandmother at Pohang Medical Hospital on Feb. 29, just one day after she was hospitalized.

After explaining his situation to the medical staff, he was allowed to stay in the hallway if he kept on a protection suit. The hospital offered a comfortable bed for him as well.

After following an orientation session on safety from the hospital, Park almost never left the side of his grandmother with his protection suit on. While he couldn’t eat meals with her, he consoled her through conversation.

The medical staff, struggling from the grandmother’s behavior coming from dementia, lauded Park’s constant care for her.

After the first three days of struggle, the grandmother began to eat and receive proper treatment, thanks to her grandson’s care. Her recovery sped up after she managed to contact other family members.

“I really felt there is a war going on against viruses as I saw the medical staff not wasting a single second on treating the patients,” said Park. “Grandma’s doing okay now. I believe what’s best for now is to be with her and care for her.”