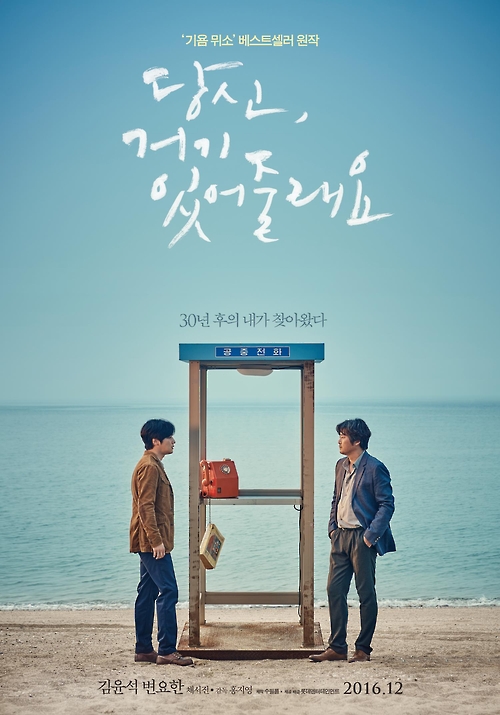 The remake, also titled Will You Be There?, is about a man who comes across ten pills that allow him to travel back in time. (image: Yonhap)

SEOUL, Oct 19 (Korea Bizwire) – Will You Be There? (Seras-tu là?), a novel by French writer Guillaume Musso, is coming to theaters, and it’s going to be a Korean film.

The book was first released in 2006, and is among Musso’s more successful works. It has since been published in 22 countries. Musso is a well-known novelist in Korea as well, claiming fourth spot on Kyobo Book Centre’s list of “most popular writers over the past decade.”

According to Korean film studio Soo Film, which is producing the remake, the movie is in post-production, and is set for domestic release in December.

Musso had been approached by several film producers from Europe, the U.S., and Asia for a potential film adaptation, said Soo Film, but he turned down the offers.

It wasn’t until 2013, when Soo Film CEO Min Jin-soo met with the writer and his publishing officials, that they started discussing a Korean adaptation of the novel. The deal was finalized in 2014.

“We guaranteed Musso and his publisher that we would produce a quality film that surpasses Hollywood movies,” said Min. “Guillaume Musso is among the most influential writers in France, and has been the highest-grossing author over the past five years. But he is also extremely cautious when talking about turning his works into movies.”

“The fact that he handed over the film publication rights to Korea, we think, is because he had faith in the sincerity of Korean films.”

The remake, also titled Will You Be There?, is about a man who comes across ten pills that allow him to travel back in time. The story unfolds as he travels 30 years into his past, trying to reconnect with the love of his life.

The film is directed by Hong Ji-young, and actors Byun Yo-han and Kim Yoon-seok will portray the present and the past of the protagonist.

“There are parts of the film that we dramatized a little to better appeal to Korean audiences. But it’ll also be a different kind of fun comparing the film to the original work.”