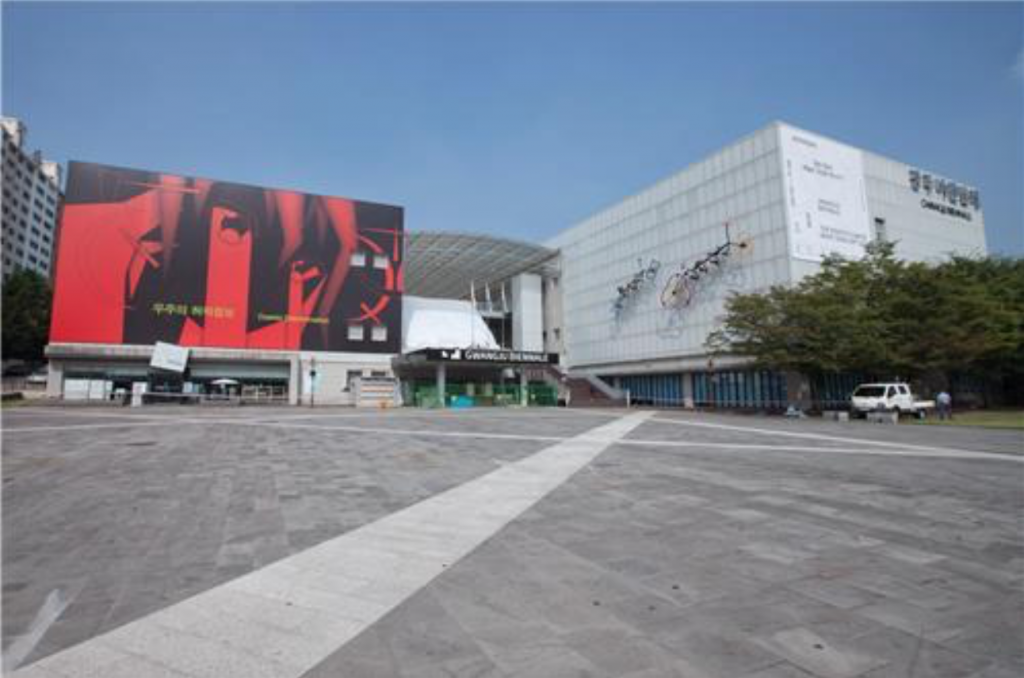 The 29-meter-wide and 16-meter-long “Information Skies” work by Metahaven, a renowned graphic design team based in Amsterdam hung on a wall of the Gwangju Biennale Exhibition Hall. (image: Yonhap)

GWANGJU, Aug. 26 (Korea Bizwire) – The opening ceremony of the 2016 Gwangju Biennale, Asia’s oldest contemporary art biennale, is set to kick off in the southwest city of Gwangju next week, the festival’s foundation said Friday.

Gwangju Mayor Yoon Jang-hyun and Culture, Sports and Tourism Minister Kim Jong-deok are to give a welcoming address and a congratulatory address, respectively. The foundation will also hold a ceremony to mark the appointment of actor Hyun Bin as a promotional ambassador for the event.

The opening ceremony will be followed by the awarding of the Noon Awards to an established artist who has contributed to the development of art and a promising young artist, with a prize of US$10,000 and $5,000, respectively.

The festivities will culminate when Gwangju citizens release light-emitting diode balloons into the sky in a gesture to wish the event a success.

As the event’s opening gets near, works by participating artists are being installed.

The 29-meter wide and 16-meter-long “Information Skies” work by Metahaven, a renowned graphic design team based in Amsterdam hangs on an exterior wall of the exhibition hall.

“Dawn Breaks,” a collaborative work by South Korean artists — Lee Joo-yo and Jung Ji-hyun who have been active in Seoul and New York -– has been installed in the city. The work will be utilized as a performance device that brings strangers together to share their separate and scattered stories.

The 11th Gwangju Biennale will bring together 120 artists from 37 countries with its focus around the question, “What does art do?”

Originally founded in 1995 in memory of the 1980 pro-democracy uprising in Gwangju, the biennale has become a cultural conduit for the city not only from South Korea to the rest of Asia but also to the rest of the world.