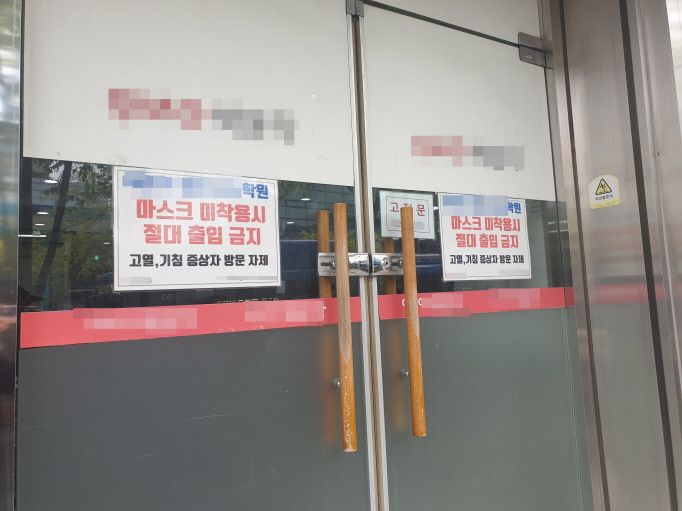 A signboard reading “No access without face masks” is posted on the gate of a cram school in Dongjak Ward, southern Seoul as it resumed operations on April 20, 2020, amid relaxed social distancing rules. (Yonhap)

SEOUL, April 20 (Korea Bizwire) — Facilities under the government’s advisory to halt operations due to the new coronavirus resumed business Monday, with precautious quarantine steps, amid the eased social distancing rules.

The government announced Sunday that it will maintain the social distancing drive until May 5, but it will ease some rules for facilities, including sports venues and cram schools, which the government had urged to suspend operations on concerns about cluster infections of COVID-19.

On the first day of the relaxed implementation, such facilities began to resume operations while complying with quarantine measures.

Cram schools in Noryangjin, in southern Seoul, where people gather to prepare for state tests to become public servants, reopened, but focused on keeping quarantine rules.

Officials at cram schools, known as “hagwon” here, checked students’ temperatures and placed their desks at least 1 meter apart, while requiring the wearing of face masks.

“Even if the social distancing guidance is eased, we will take quarantine measures thoroughly as students tend to gather here,” a hagwon official said.

They suspended the free supply of sportswear and towels and shut down saunas.

“We resumed operations today, but some users in wait-and-see mode, saying that they still feel insecure,” said an official at a sports center in Pyeongtaek, some 70 kilometers south of Seoul. 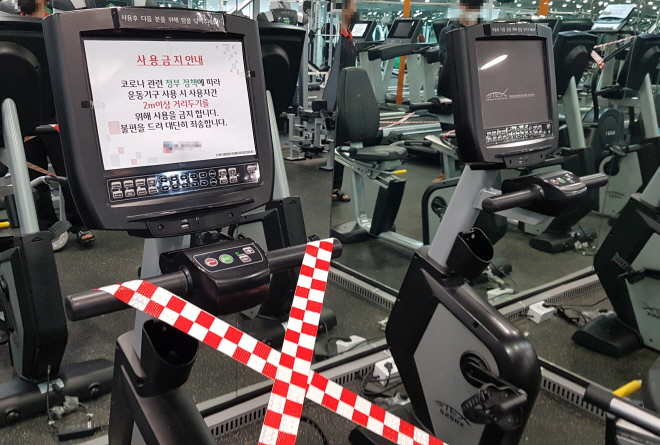 The use of an exercise bike is prohibited at a sports center in Jongno, central Seoul, on April 20, 2020, to compel users to keep a distance of 2 meters from each other. (Yonhap)

As part of the stricter social distancing campaign, the government issued an administrative order on churches, bars, gyms and cram schools that strongly recommended their temporary closure.

The government lifted the rules Sunday on condition that they comply with strict quarantine rules.

South Korea reported fewer than 20 new cases of the new coronavirus for the third straight day on Monday, bringing the nation’s total infections to 10,674.

The eased social distancing rules seem to be largely inevitable, given the pandemic’s prolonged economic fallout.

But some people are still concerned that the relaxed rules may spark an uptick in infections.

“I understand that people’s fatigue about the coronavirus remains high. But I wonder whether keeping the social distancing in places like clubs will be possible,” said a 58-year-old office worker in the southeastern city of Pohang.

“I am concerned that the virus, well contained so far, could spread again,” he added.