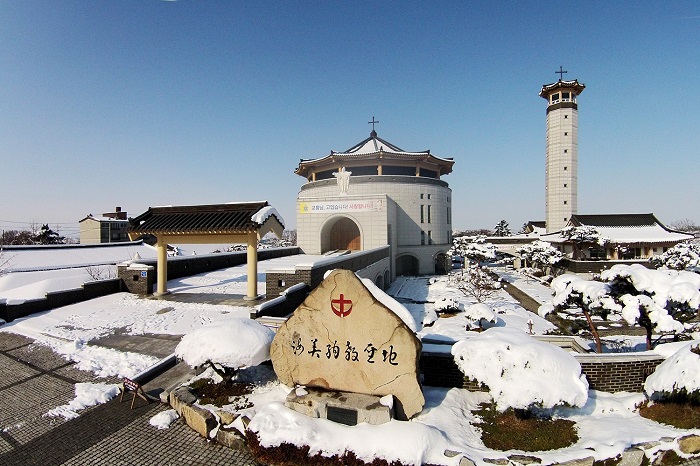 The Holy See designated and proclaimed the Seosan martyrdom holy ground, also known as the Shrine of Haemi, as an official international pilgrimage site on March 1, according to the municipality of Seosan, a South Chungcheong Province city about 280 kilometers south of Seoul.

On Nov. 29 last year, the Vatican approved the Shrine of Haemi as an official international pilgrimage site and has since taken procedures for its proclamation, it noted.

The Haemi Martyrdom Holy Ground is the site where about 2,000 Catholics in the central region were buried alive during a mass persecution of Korean Catholics by the Joseon Dynasty (1392-1910) between 1866 and 1882.

A 16-meter-high memorial tower was set up to pay tribute to the nameless martyrs. There are records of only 132 Korean Catholics who were martyred with their names or baptismal names.

The Haemi shrine has become the nation’s second official international pilgrimage site proclaimed by the Vatican after the Seoul Catholic Pilgrimage Routes. It is also the third of its kind in Asia.

The Vatican’s other existing official international pilgrimage sites include three historical places — Jerusalem of Israel, Rome of Italy and Santiago of Spain — and 20 sites of Marian apparitions across the world.

“The proclamation of the Haemi Martyrdom Holy Ground as an official international pilgrimage site is a glorious event that recognizes the faith of nameless martyrs as an example and makes it known to the entire world,” a Catholic priest in charge of the shrine said.