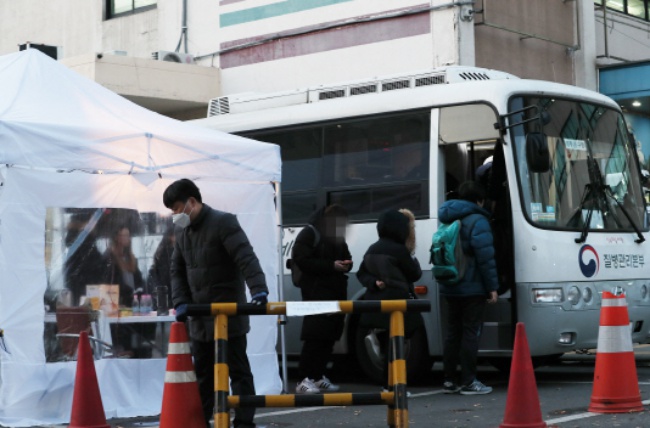 According to the Korea Centers for Disease Control and Prevention, a student was diagnosed with the disease during a local medical test provided by the organization.(Image: Yonhap)

SEOUL, Dec. 21 (Korea Bizwire) – Health authorities have been put on alert after yet another student was diagnosed with tuberculosis in the famous hagwon town Noryangjin.

According to the Korea Centers for Disease Control and Prevention, a student was diagnosed with the disease during a local medical test provided by the organization.

The student in question is the latest person to contract the highly contagious lung disease in Noryangjin, home to dozens of private academies where students from across the country come to study for various exams.

The latest development comes after public health authorities conducted a major test for hundreds of people who were found to have been in contact with other tuberculosis patients from last month, as well as 1,000 people who wished to get tested.

Though 261 of the people who came into contact with a tuberculosis patient have tested negative, the fact that the new patient had no connection with a patient from last month is sending warning signs to the health authorities, particularly in a densely populated area like Noryangjin where infectious diseases like tuberculosis can spread quickly.

Many of the dorms in Noryangjin are for students in their 20s and 30s who go to private academies, and health officials say it’s crucial that they eliminate any risks before separate cases grow into a regional epidemic.

Currently, health officials are working with the Korean National Tuberculosis Association to conduct necessary tests with some 800 people who were reported to have come in contact with a tuberculosis student through an epidemiological survey.

The number of people diagnosed with tuberculosis in South Korea was estimated at 30,892. Health authorities in South Korea conduct around 3,500 tests every year with up to 180,000 suspect patients who are found to have been in touch with patients.

Tuberculosis has been one of the biggest health challenges facing the country.

Earlier this year, the Korea Centers for Disease Control and Prevention found scores of infants infected with the disease at Monet Woman’s Hospital following a nurse’s diagnosis, prompting lawmakers to propose a bill requiring medical staff to take a tuberculosis test.