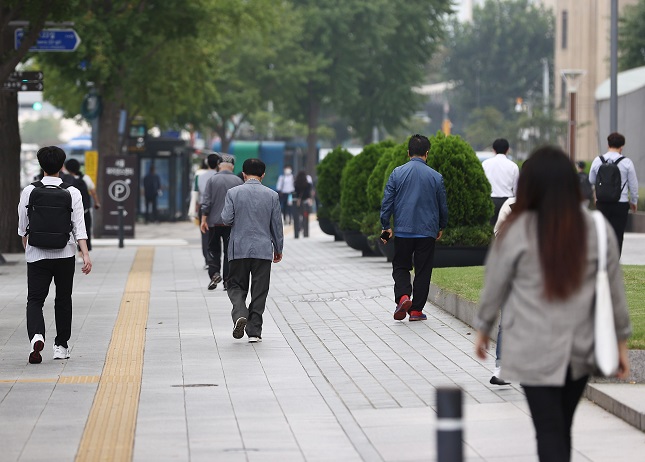 Citizens walk apart from one another near Seoul City Hall on Sept. 15, 2020. (Yonhap)

SEOUL, May 4 (Korea Bizwire) — About half of South Koreans in their 40s who live in metropolitan areas own their own homes, but they are still having difficulty preparing for old age due to the cost of their home and spending on education for their children.

A research unit under KEB Hana Bank released a report on Monday that includes the results of a survey conducted in November 2020 by Korea Research of 1,000 income earners in their 40s who live in Seoul and four other metropolitan areas.

According to the report, the respondents’ after-tax monthly income averaged 4.68 million won (US$4,178), with a median value of 4 million won.

Respondents reported spending 73 percent or 3.43 million won of their monthly income on living expenses and educational expenses for children.

Roughly two thirds of the respondents said that their current income was not high enough to cover living expenses and investments.

The largest share of the respondents (42 percent) picked ‘preparation of retirement assets’ as the most important life task, followed by residential stability (36 percent).

Among those who selected the preparation of retirement assets as the most important life task, the largest share picked a shortage of financial assets as the primary reason.

Among those who selected residential stability as the most important life task, the largest share replied that the primary reason why they thought so was that the burden of buying a home grows if it is delayed.