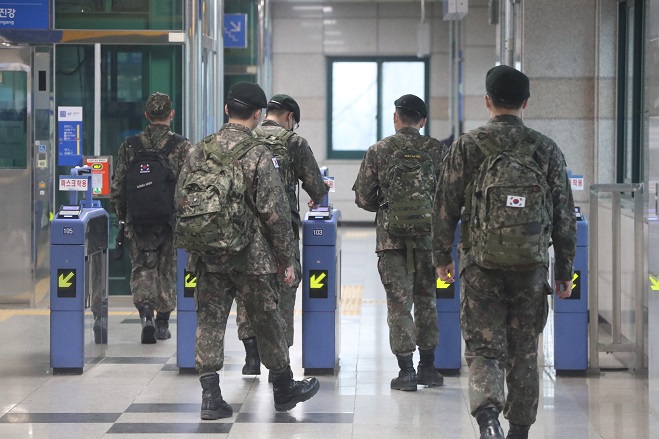 In this file photo, taken on Feb. 15, 2021, soldiers enter Munsan Station in Paju, north of Seoul, as the defense ministry lifted a monthslong restriction on military leave the same day in accordance with the easing of the government’s social distancing rules against COVID-19. (Yonhap)

SEOUL, April 23 (Korea Bizwire) — Despite about 10 years having passed since a soldier died at an army training center due to a delay in treatment of cerebral meningitis in 2011, South Korea still appears to have a long way to go to improve its military medical system.

According to a report released by the National Human Rights Commission of Korea, 24.8 percent (158) of 637 soldiers surveyed who used military medical services turned out to have been either misdiagnosed or did not receive a diagnosis in a timely manner.

As for the primary factors behind the failure to receive medical treatment on time, the respondents said that they had no time to visit medical institutions due to training or daily duties.

Besides, they also pointed the difficulty in leaving their post and the military atmosphere that makes it difficult to tell others that they are sick.

The quality of military medical service stills lags behind the private sector. One of chronic problems is a shortage of skilled medical staff.

According to the Ministry of Defense, among the military’s 2,400 surgeons, only 6 percent had been serving long-term as of July 2020.

Experts stress that the government needs to improve military service conditions to enable soldiers to receive medical diagnosis and treatment on time, recommending the adoption of a ‘select and focus’ strategy in the military’s medical capabilities through the separation of roles between military and private medical institutions.

“In reality, it’s impossible for the military to cover the full range of medical capabilities. The military needs to strengthen cooperation with the private sector for areas like severe diseases where highly competent medical capabilities are required,” said Lim Tae-hoon, head of the of the Center for Military Human Rights Korea.

“Instead, the military medical system should focus on a specific range of areas, including wounds caused by guns or explosives.”