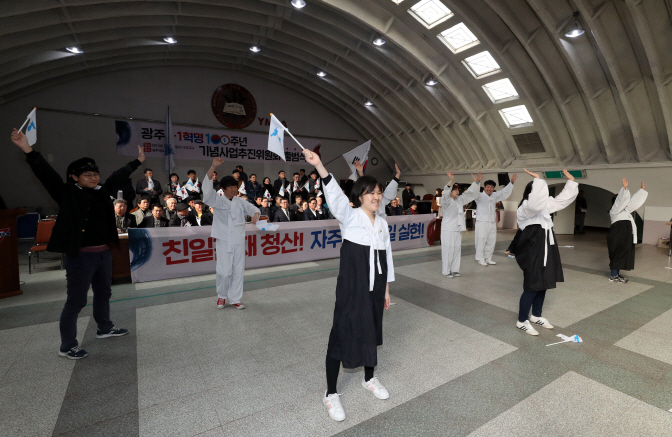 A reenactment of the March 1 Independence Movement at an event in the southern city of Gwangju on Jan. 30, 2019. (Yonhap)

SEOUL, Feb. 20 (Korea Bizwire) — Nearly half of South Koreans are in favor of changing the status of the March 1, 1919, independence movement against Japan’s colonial rule of Korea to a revolution, a poll showed Wednesday.

The survey found 38.8 percent opposing the name change, with the remaining 11.8 percent saying they don’t have an opinion or declined to answer.

Calls for elevating the March 1 uprising from movement to revolution have recently surfaced, as this year marked the centennial of the massive popular resistance to the Japanese colonial occupation.

The March 1 Independence Movement began in Seoul on that day 100 years ago and spread throughout the country.

Detailed data are not available but historians estimate that more than 2 million Koreans participated in over 2,000 demonstrations to call for independence from Japan. Korea was a colony of Japan from 1910 to 1945.

The movement is also referred to as the “Manse” movement, as demonstrators shouted, “Daehan dongnip manse,” which means, “Long Live the independence of Korea.”

The poll has a margin of error of plus or minus 4.4 percentage points and a confidence level of 95 percent.