The movie has been highly acclaimed at home and abroad, picking up top prizes at the 43rd International Film Festival Rotterdam and several other film festivals. (still image from the film)

SEOUL, Jan. 26 (Korea Bizwire) – The Korean film reporters’ association said Monday that it has chosen “Han Gong-ju,” a film about the life of a high school girl, as the best homegrown picture of 2014.

The feature film by director Lee Su-jin was chosen to win Best Picture from the Korea Film Reporters Association, beating out the latest box-office sensations “Roaring Currents” and “Ode to My Father.” Chun Woo-hee won the Best Actress award for “Han Gong-ju.”

The movie has been highly acclaimed at home and abroad, picking up top prizes at the 43rd International Film Festival Rotterdam and several other film festivals. It tells the story of a high school girl named Han Gong-ju who moved and changed schools after becoming involved in a nasty situation.
Choi Min-shik received the Best Actor award for “Roaring Currents,” a historical drama about a 16th-century Korean naval hero’s crushing victory over Japanese naval forces, while the best director went to Kim Seong-hun for “A Hard Day.”
Yoo Hae-jin of “The Pirates” and Jo Yeo-jeong of “Obsessed” won Best Supporting actor and Actress, respectively.

The Korea Film Reporters Association, with 67 members in 48 media companies, chooses winners of the “Film of the Year Awards” every January from all homegrown films that opened the previous year. Winners are chosen through the members’ votes.

This year’s awards ceremony is scheduled for Thursday. 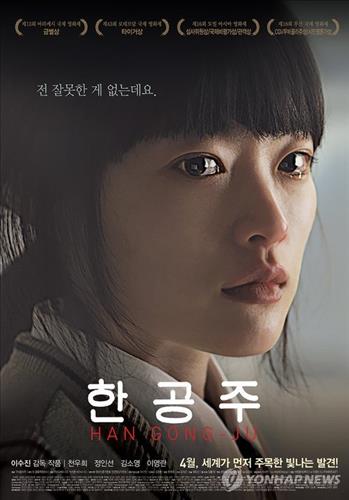