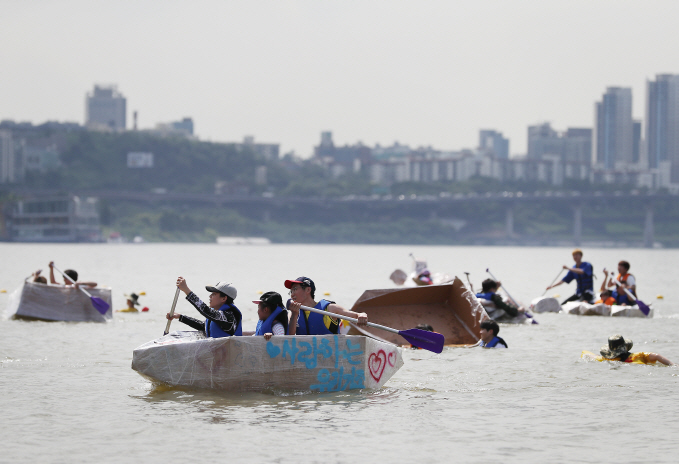 People aboard boats made of corrugated cardboard cross the Han River in Seoul on Aug. 2, 2019, as part of a paper boat contest. (Yonhap)

Participants were found near the park’s information center cutting and gluing paper together to build boats in various shapes and sizes.

The boats were built with thick cardboard big enough to fit people, wrapped with plastic film to prevent the paper from getting soaked with water. There were boats that looked like water taxis, battleships, and more.

Participants began building the boats at 9 a.m. on the day of the competition. Races were held whenever there were enough teams available.

There were some boats that sank during the race. At the sound of a whistle, the boats had to sail 50 meters to reach a turning point and come back to the starting line.

There were some boats that couldn’t move an inch throughout the entire race.

All participants were given life vests for safety during the race. Whenever a boat sank, lifeguards swiftly and safely rescued the participants floating in the water.

“Since the boats are made of paper, they won’t advance on the water unless they are well balanced,” said Kim Young-joo from the Hangang Project Headquarters.