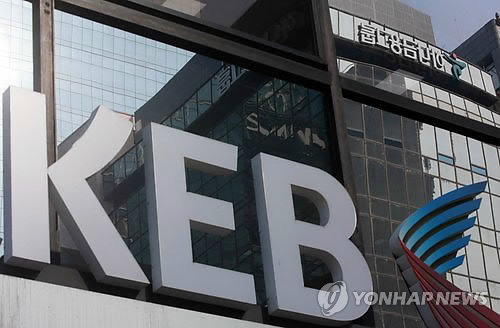 The integrated Hana-KEB bank is expected to emerge as the largest lender by assets in South Korea. (image: Yonhap)

Hana Financial has been pushing for the merger since its acquisition of KEB from U.S. buyout fund Loan Star in 2012 but faced strong opposition from the KEB union, which claims Hana had promised to allow an independent management for five years.

In February, a Seoul court issued an injunction banning Hana Financial from engaging in any merger processes, citing its earlier promise with KEB’s union.

But an appellate court ruled in favor of Hana Financial last month, dismissing the earlier court’s injunction, to pave the way for the company to resume the talks with the labor union.

“We also decided to implement the agreement with sincerity based on the principle of good faith.”

A Hana Financial official said the united entity will be launched before October.

Hana Financial is expected to file a request with the Financial Services Commission (FSC), the country’s financial regulator, for the merger approval later this week. The FSC has stressed that mutual consent between Hana Financial and KEB union is a prerequisite for approval.

“We will speed up the process for approval of the Hana Bank-KEB merger,” said an FSC official. “The FSC will support the company to complete the integration.”

The integrated Hana-KEB bank is expected to emerge as the largest lender by assets in South Korea. Their combined assets stood at 338 trillion won (US$298.6 billion) as of end-March, outpacing Kookmin Bank with assets of 313 trillion won.