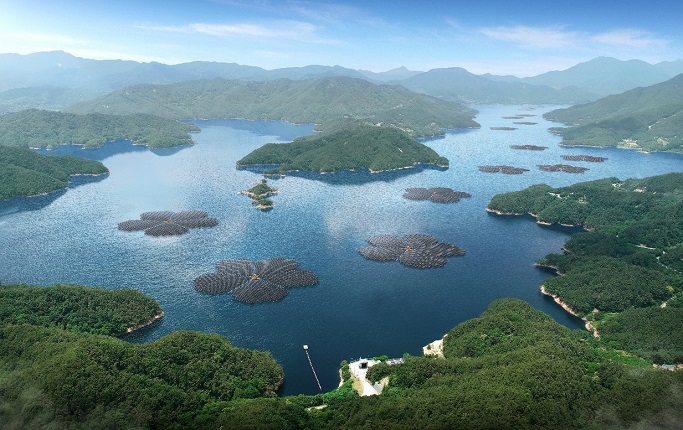 This image provided by Hanwha Q Cells shows a bird’s-eye view of its solar power plant to be built at Hapcheon Dam.

The new installation will be the world’s largest floating solar power plant built at a dam. Also, it will have the largest scale among the floating solar farms that have already received government approval in South Korea.

The company received the floating solar farm order from the Korea Water Resources Corporation in August.

Hanwha Q Cells received final approval for the project on Nov. 4 and plans to begin construction before the end of the year.

The company said that floating solar power plants contribute to the effective use of national land territory by making use of the idle water surface.

The Hapcheon Dam floating solar power plant will generate enough electricity for about 60,000 households to use in a year.

Hanwha Q Cells plans to use its Q. PEAK DUO Poseidon modules that are specialized for floating solar farms.

The modules, which have been designed to resist high temperature and humidity, have endured and passed tests which involved them being exposed to an environment with a temperature of 85 Celsius degrees and a relative humidity of 85 percent for more than 3,000 hours.