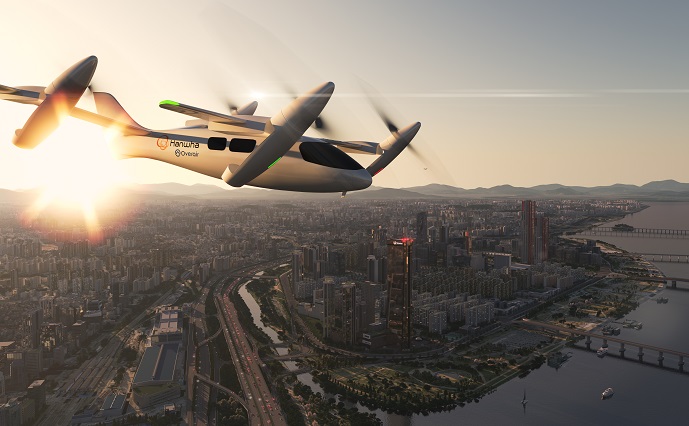 SEOUL, June 14 (Korea Bizwire) — Defense industry units of South Korea’s Hanwha Group said Tuesday they are investing a combined US$115 million in a U.S. urban air taxi startup, as it seeks to gain an edge in the prospective urban air mobility (UAM) industry.

Hanwha Systems Co. and Hanwha Aerospace Co. will spend $50 million and $65 million, respectively, in the financing of Overair Inc., a California-based UAM company, for the development and production of the startup’s envisioned flying taxi model named Butterfly, the two companies said in a joint press release.

Butterfly is an envisioned all-electric vertical take-off and landing (eVTOL) aircraft that, if fully charged, could hypothetically travel at a maximum speed of 320 kph — meaning it could carry passengers from Gimpo International Airport in western Seoul to the eastern district of Jamsil in about 10-15 minutes, according to Hanwha.

Hanwha Aerospace will join as an investor for the first time as it gears up to co-develop a battery-powered electric propulsion system, or an engine for the UAM airframe, it said.

It already marks Hanwha Systems’ third round of funding for Overair, following its previous investments of $25 million in 2019 and another $30 million in August last year, through which it became a major shareholder in the company.

In light of future demand for more advanced versions of UAMs, Hanwha Aerospace said it will collaborate with Overair to create a hybrid electric propulsion system by combining gas turbines and hydrogen fuel cells with electric batteries.

Hanwha and Overair plan to produce a Butterfly prototype in the first half of 2023.

Once the technical verifications are completed, they will participate in the UAM demonstration project led by the South Korean government and seek certification by the U.S. Federal Aviation Administration, according to Hanwha.