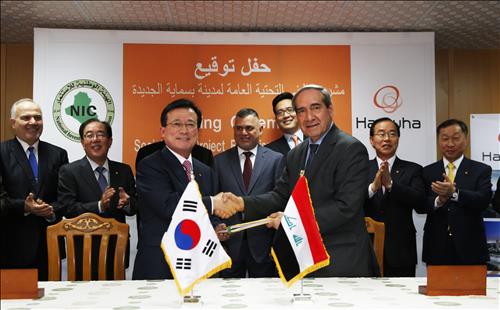 SEOUL, April 6 (Korea Bizwire) — Hanwha Group, a South Korean chemicals and financial conglomerate, said Monday it has clinched a US$2.12 billion order to build the infrastructure for a new city currently under construction in Iraq.

The agreement signed with Iraq’s National Investment Commission calls for Hanwha Engineering & Construction, the building arm of the conglomerate, to build the social infrastructure as part of the company’s Bismayah New City project in the Middle Eastern country, the group said in a press release.

Under the latest deal, 300 facilities, including schools and hospitals, will be set up within the new city.

The Bismayah construction project is expected to be completed in 2019, the conglomerate said.

“The Iraqi government is also planning to build 1 million houses as part of its post-war restoration project,” a Hanwha E&C official said. “The deal is likely to give us the upper hand in garnering future projects for building additional new cities in the country.”