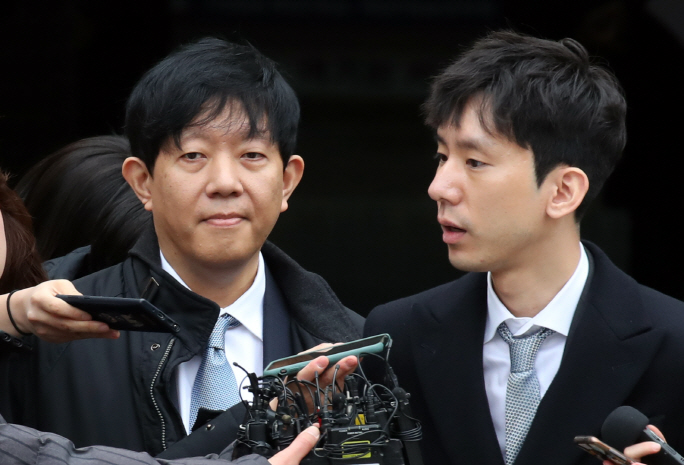 Lee Jae-woong (L), the chief of car-sharing app operator SoCar, and Park Jae-uk, who leads SoCar’s subsidiary Value Creators & Company, answers questions from reporters on Feb. 19, 2020, after a Seoul court acquitted them over illegality of the app-based business. (Yonhap)

SEOUL, Feb. 19 (Korea Bizwire) — A Seoul court ruled in favor of the ride-hailing service Tada as a legitimate rental car service Wednesday, in a landmark decision that will likely support the mobility platform industry.

The two were indicted in October 2019 without physical detention for allegedly running a transportation business without a license.

“The Tada service is provided in a contract that offers users a tailored rental service in time of need via minute-based reservation. It is a rental car service based on mobile application,” the court said.

The prosecution earlier requested a one-year jail term for each of them and a 20 million-won (US$16,785) fine against VCNC.

“Tada is not guilty. Innovation is the future. I deeply appreciate the court’s wise decision,” Lee wrote on his Face account after the ruling.

The ruling will likely lend support to the mobility platform industry, for which the government seeks to ease excessive regulations as part of its efforts to nurture the innovative growth.

Tada — which means “to ride” in Korean — was launched in October 2018 and has rapidly grown to become South Korea’s leading ride-offering service. It operates mostly in the Seoul metropolitan area, offering services for 11-seat vans instead of sedans.

The centerpiece of the controversy lies in whether Tada should be considered a type of rental car service or an illegal taxi service operating without a license.

Taxi drivers claim that Tada threatens their livelihood and violates the transportation law that forbids rented vehicles from offering rides in exchange for money.

Tada has argued that its business is within legal boundaries based on a written exception that specifically allows rented vans — or vans with 11 to 15 seats — to be offered with drivers.

Local transport laws allow rental cars with a capacity of 11-15 seats to be legally leased with a driver. 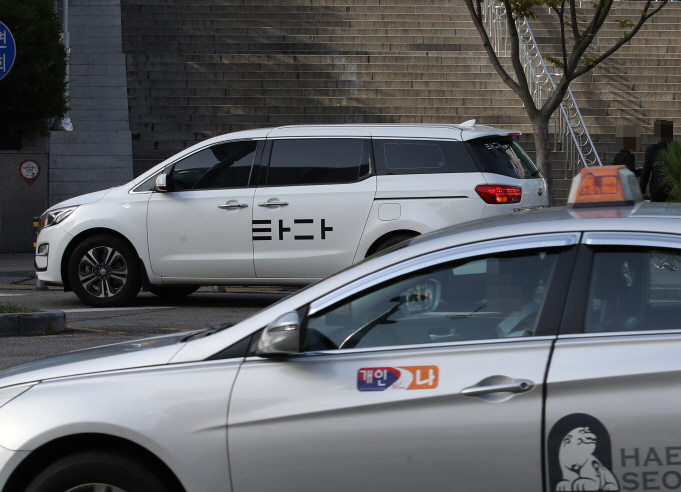 The local taxi industry argues this is an arbitrary application of the rule, irrelevant to its original purpose of promoting tourism.

In court sessions, Lee criticized the prosecution for turning a blind eye to the changing mobility industry and the government’s move to ease regulations that apply to new technologies.

SoCar, meanwhile, welcomed the court’s ruling, saying it will allow the mobility platform provider to continue its services to a sustainable future within the boundaries of laws and regulations.

“We will further focus on improving the convenience of the underprivileged in terms of transportation, making working environments better for Tada drivers, and seek win-win synergies between Tada and taxi services,” SoCar said in a statement.

But the taxi industry vehemently protested the ruling, pledging to continue to fight against the Tada service.

“The ruling excluded a judgment on how illegal operations by Tada have prompted the passenger transportation industry to collapse. The decision amounts an exoneration of Tada, which uses lots of capital and a large law firm,” four associations of taxi service providers said in a joint statement.

Tensions between the shared mobility industry and the taxi sector have not shown signs of abating despite the government’s efforts to mediate between them. Several taxi drivers have set themselves on fire in protest at Tada.

The ruling may affect the National Assembly’s review of a bill to revise the passenger transport service act, commonly seen as a means of outlawing Tada.

The bill, submitted by a ruling party lawmaker, calls for restricting the outsourcing of drivers of rental vans with 11-15 seats to tour purposes only.

Vehicles should be rented for at least six hours and users would be required to possess boarding passes if vehicles are rented or returned at airports or seaports, according to the bill’s stipulations.

If the bill is passed at parliament and signed into law, it could drive Tada out its current business. But ahead of the April 15 general elections, it is not certain how the National Assembly will deal with the measure.