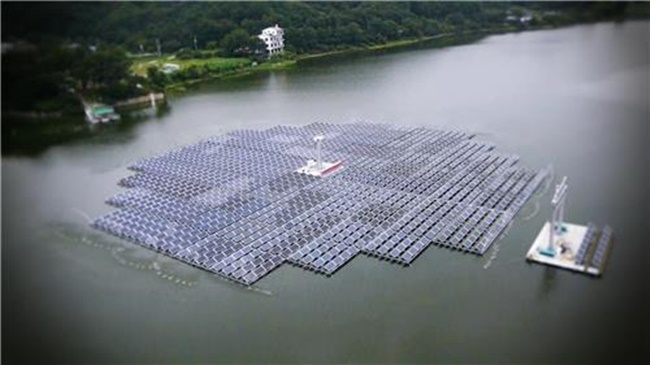 This provided photo shows a rotating solar power station that Solkiss, a solar power generation company, installed on a reservoir in the city of Anseong, south of Seoul, 2014. (Image: Yonhap)

SUWON, South Korea, June 28 (Korea Bizwire) – A South Korean leader in solar energy generation said Wednesday that it will build what it claims to be the world’s largest floating solar power generation facility designed to follow the sun’s movement at two reservoirs in the city of Hwaseong, south of Seoul.

Once built, the energy output of the three floating plants, which will cover 78,000 square meters, should be enough to supply power to about 2,300 households in the Gyeonggi Province city.

The company will hold a ceremony at the Myeoku Reservoir on Thursday to mark the start of the construction of the three plants.

Work on the three floating plants is scheduled to be completed by the end of November. Right after the dedication of the plants, Solkiss plans to begin commercial generation on the plants by obtaining a license for the business from the Gyeonggi provincial government.

Solkiss, which has established fundamental technologies for a rotating solar power station on water, said the module powered by two engines is designed to move to track the movement of the sun, which helps increase energy efficiency.

The construction of the three new plants will come after the company built a solar power station on water with movable panels at a reservoir in the province’s Anseong in 2014 for the first time in the world. The power station, set up on a site of 7,000 square meters, is capable of 465 kilowatts of energy per hour that is enough to provide electricity to 200 households for an average 4.2 hours a day.

A Solkiss official said the company plans to push ahead with a project to expand the movable power stations on water throughout the country, expressing hope that the project will be in line with the government’s commitment to steer the country away from its dependence on nuclear and coal power.

The company also plans to make a foray into Vietnam and other countries to show off its technological prowess.