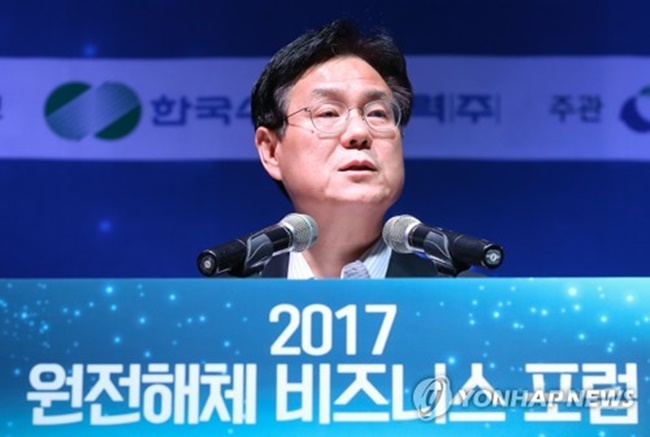 SEOUL, Jan. 18 (Korea Bizwire) – South Korea’s nuclear operator said Thursday that its chief will step down this week, an abrupt resignation that has raised speculation that his criticism of the government’s anti-nuclear policy may have cost him his job.

Lee is set to leave the company in a ceremony scheduled for Friday at the company’s headquarters in Gyeongju, 370 kilometers southeast of Seoul, the nuclear operator said.

His departure comes 22 months before his three-year term expires. There has been speculation that he may have been under pressure to quit over his criticism of the government’s anti-nuclear policy.

The former deputy minister of trade, industry and energy voiced opposition when the government suspended construction of two unfinished nuclear reactors last year to collect opinions about the issue.

The nuclear operator suspended construction of the Shin Kori-5 and Shin Kori-6 units in the southeastern city of Ulsan for three months from July to collect public opinions and resumed the process in October at the recommendation of a civilian panel.

Lee is one of the latest state-controlled utility firm chiefs who offered toquit as the Moon Jae-in administration pushes to reduce nuclear and coal-fueled power and expand renewable energy.

In early December, Cho Hwan-eik, the president of the Korea Electric Power Corp. resigned after the state-run power utility was selected as the preferred bidder for a nuclear project in Britain.

In South Korea, it is not unusual for a leader of a public company to step down before his or her term ends, especially after a new president takes office.