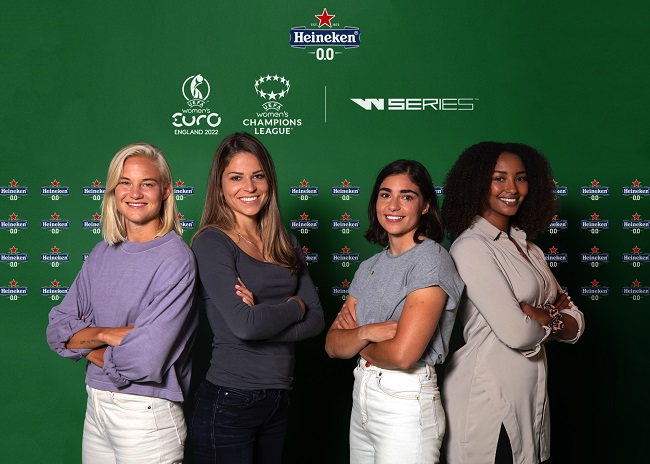 AMSTERDAM, Aug. 26 (Korea Bizwire) — The hope, the cheers, the suspense, the celebration – and having the very best of times before, during and after a sports event… it’s what fans want, now more than ever. That’s why Heineken® is announcing new partnerships to provide even more top performances for fans to cheer on with UEFA’s Women’s Champions League, UEFA Women’s EURO 2022 and 2025, and W Series, the international single-seater motor racing championship for female drivers.

Fans can look forward to world-class sport, accompanied by exclusive DJ sets to round off the action and emotion. For Heineken® it’s a new chapter in its commitment to fans, building on thriving partnerships within football and motorsport.

“We are committed to delivering great shared moments to consumers all over the world and our sponsorships are exciting platforms to connect with fans through their passions and enhance their experiences. By extending our partnerships in football and motorsport to include W Series, UEFA Women’s Champions League and UEFA Women’s EURO 2022 and 2025, we are enabling more thrilling experiences for all.”

“Our multi-year deals with W Series, UEFA Women’s Champions League and UEFA Women’s EURO 2022 and 2025 enable us to create even more world-class experiences to enhance the sports that fans love. And we know that fan passion is not determined by gender, but by coming together over the love for the sport and the world class athletes. That’s why we are proud to announce extensions to our partnerships in football and motorsport.”

Nadine Kessler, Chief of Women’s Football at UEFA, said: “We are delighted to expand our fantastic 25-year relationship with Heineken® through to the UEFA Women’s Champions League and UEFA Women’s EURO 2022 and 2025. This expansion demonstrates Heineken®’s continued commitment to being an advocate and supporter of the whole of European football, women’s and men’s, and the amazing fans, players and coaches who make these tournaments so special.”

Catherine Bond-Muir, CEO of W Series, said: “This partnership marks another exciting step forward for W Series and our mission to further the interests and prospects of female racing drivers. Heineken®’s commitment to supporting us shows how W Series is going from strength to strength enhancing the way our fans watch racing through exceptional experiences. We know the incredible support that Heineken® brings through their outstanding engagement with racing fans across the world and we are delighted to partner with Heineken® for this incredible journey.”

Heineken®’s partnership with UEFA women’s tournament will extend through until the end of the 2024/25 season. The partnership will provide Heineken® with additional ticketing, hospitality, branding and pouring opportunities as well as digital fan activations including the Heineken Goal of the Round, and in stadium activations and experiences for fans like the Heineken Best Seat in the House.

Heineken®’s multi-year deal with W Series will give the premium beer brand at-track visibility at races, Heineken® 0.0, digital activation ‘Heineken Star of the Track’, its continued support to responsibility through When You Drive Never Drink and – of course – track-side fan experiences throughout the season. 2021 is a big year for W Series, which launched in 2018. For the first time the championship will join eight Formula 1, Grand Prix races across the season, giving motorsport fans the opportunity to watch the world’s top female drivers compete.

The announcement of these new sponsorships is celebrated in a new film featuring Heineken® ambassadors Thierry Henry and David Coulthard, alongside Pernille Harder, Melanie Leupolz, Jamie Chadwick, and Naomi Schiff. The film captures the shared magic, drama and excitement of sports – that is what makes it so special for the fans.

The short film can be viewed in full here: [link]

A Media Snippet accompanying this announcement is available by clicking on the image or link below:

HEINEKEN has a well-balanced geographic footprint with leadership positions in both developed and developing markets. We employ over 80,000 employees and operate breweries, malteries, cider plants and other production facilities in more than 70 countries. Heineken N.V. and Heineken Holding N.V. shares trade on the Euronext in Amsterdam. Prices for the ordinary shares may be accessed on Bloomberg under the symbols HEIA NA and HEIO NA and on Reuters under HEIN.AS and HEIO.AS. HEINEKEN has two sponsored level 1 American Depositary Receipt (ADR) programmes: Heineken N.V. (OTCQX: HEINY) and Heineken Holding N.V. (OTCQX: HKHHY).

W Series is a free-to-enter championship, launched in October 2018, that provides equal opportunities for women.

W Series drivers are selected purely on their ability and the series’ cars are mechanically identical, which means that W Series races and championships will be won by the most talented drivers.

The more high-profile female role models it can create, the more W Series believes it will bring more females into the sport. Central to W Series’ mission is the idea that if you can see it, you can be it.

A new UEFA Women’s Champions League format will be introduced from 2021/22, including a 16-team group stage as well as centralised marketing and TV coverage.

The change was agreed by the UEFA Executive Committee in Nyon as the first direct outcome of the UEFA women’s football strategy #TimeForAction, which aims to double the reach and value of the UEFA Women’s Champions League.

The change means a 20% increase in the number of matches, or a 39% increase excluding the first round which is played in the form of mini-tournaments, and gives the tournament more competitive games and increased visibility and quality. The new format was developed by UEFA in close collaboration with the clubs and the European Club Association and will set a new benchmark for an international women’s club football competition.

UEFA Women’s EURO 2022 will be played from 6 to 31 July in England, across 9 stadiums, with 15 other nations joining the host country for the tournament.

The 16 sides will be drawn into four groups of four, with the top two in each section progressing to the knockout phase. . The draw for the group stages will take place on the 28th of October 2021. The final will take place at Wembley Stadium on the 31st of July 2022.