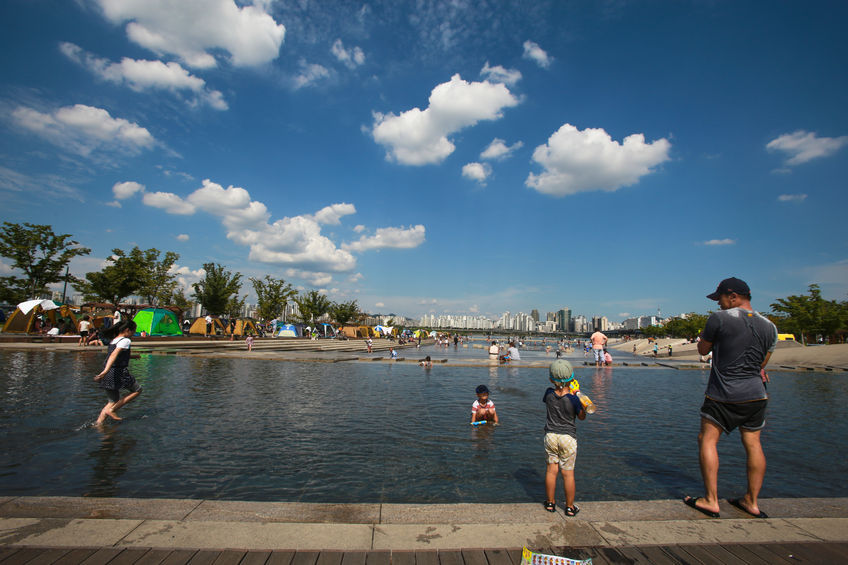 Han River Park in Seoul. The KCDC noted that the number of individuals afflicted with heat-related illnesses has far exceeded the 2013 figure of 1,189, which was the previous record high since the monitoring system was launched. (image: KobizMedia/ Korea Bizwire)

SEOUL, Aug. 22 (Korea Bizwire) – The record-breaking heat wave that continues to beset the Korean Peninsula is triggering health concerns, with citizens succumbing to a number of medical conditions brought on by the oppressive heat.

According to the Korea Centers for Disease Control & Prevention (KCDC) on Sunday, 1,949 individuals have suffered from heat-related illnesses such as heatstroke, heat exhaustion, and heat cramps since it started operating a monitoring system for such patients on May 23, and 16 people have lost their lives so far.

The KCDC also noted that the number of individuals afflicted with heat-related illnesses has far exceeded the 2013 figure of 1,189, which was the previous record high since the monitoring system was launched.

On a brighter note, however, the number of food poisoning cases dropped compared to last year.

According to Gyeonggi Province, 54 food poisoning cases affected 641 individuals from January to July, which according to the province, was a decrease from 54 cases and 840 patients during the same period in 2015.

Gyeonggi officials claimed that people were handling food with extra caution given the abnormal weather, both at home and at restaurants.

To better prevent heat-related illnesses, citizens are advised to refrain from outdoor activities during the hours when the sun and heat are the strongest, between 11 a.m. and 2 p.m. When outdoors, one should stay away from direct sunlight, take frequent rests in the shade, and stay hydrated. Alcohol and caffeinated drinks should also be avoided.