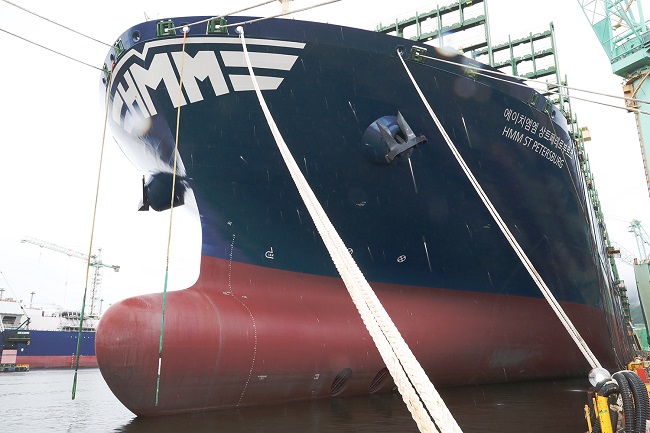 This photo, provided by HMM, shows the bow of its 24,000-TEU vessel at the Samsung Heavy Industries’ Geoje shipyard.

GEOJE ISLAND, Aug. 12 (Korea Bizwire) — Hundreds of workers put the final touches on the St. Petersburg, one of the world’s largest container ships, at a shipyard in southern South Korea this week as the Asian country pushes to revive its shipping industry.

The workers tested marine and electrical systems of the vessel with a capacity of 24,000 twenty-foot equivalent units (TEU) at the Samsung Heavy Industries’ Geoje shipyard amid rain on Tuesday ahead of sea trials in the coming weeks.

TEU is a measure used for the capacity of container transportation.

The test occurred as sharp sirens rang intermittently, prompting the workers to try to identify and fix any faults.

The St. Petersburg is set for sea trials in the East Sea in two weeks to check its performance, seaworthiness and equipment such as X-band radar before being handed over to HMM Co., South Korea’s largest shipper, an official of Samsung Heavy Industries said.

The container ship — the 12th of the 24,000-TEU vessels — will join the fleet of HMM’s global shipping network next month.

The ship — which is more than four times the size of a football pitch and longer than the Eiffel Tower by 100 meters — can carry about 7 billion Choco Pies, an individually-wrapped, chocolate-covered, marshmallow-filled snack cake, on a single voyage, an amount that can feed most of the world’s population.

Its capacity is an increase of 208 TEU compared with MSC Mia, previously the largest container ship built by Samsung Heavy Industries at its Geoje shipyard.

HMM’s latest container ship named after the Russian port city of St. Petersburg is set to depart South Korea’s largest port city of Busan next month for port calls in Asia before passing through the Suez Canal en route to Europe.

HMM has named the 11 other 24,000-TEU vessels after major ports in Europe such as Rotterdam, Hamburg and Copenhagen in a symbolic gesture that demonstrates “its commitment to regaining its competitive edge on Europe routes and reviving” the country’s once-powerful shipping industry.

South Korea had lost its edge to foreign shippers for the global maritime transport of cargo since the 2017 collapse of Hanjin Shipping and the worsening troubles of HMM.

The global shipping industry has faced unprecedented challenges since 2015 due to falling freight rates stemming from an oversupply of ships and a protracted slump in the global economy.

In 2018, South Korea launched a five-year project to revive the shipping industry, which calls for, among other things, ordering about 200 vessels through 2020. 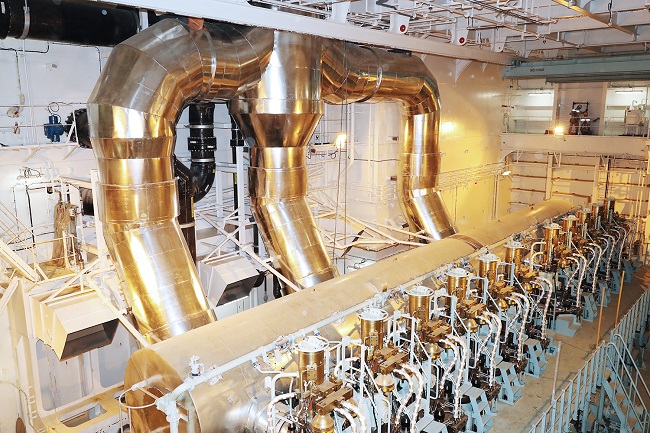 Hyundai Heavy Industries has been building eight 16,000-TEU container ships for delivery in the first half of next year.

The move would boost HMM’s capacity to 900,000 TEU on its ships. HMM said it aims to raise its shipping capacity to 1.1 million TEU by 2022 to secure competitiveness.

In April, HMM joined THE Alliance, one of the world’s top three shipping alliances along with 2M Alliance and Ocean Alliance.

THE Alliance was formed in April 2017 by Hapag-Lloyd AG of Germany, Ocean Network Express Pte. Ltd. of Japan and Yang Ming Marine Transport Corp. of Taiwan.

Also Wednesday, HMM said it shifted to the black in the second quarter of the year from a year earlier due to its cooperation with THE Alliance and the deployment of 24,000-TEU-class container ships.

For the three months that ended on June 30, the company posted a net profit of 28.1 billion won, swinging from a net loss of 200.7 billion won a year earlier, the company said in a regulatory filing.

“HMM will continue to fully utilize its assets, including 24,000-TEU-class container ships, in line with service products of THE Alliance,” the company said in a statement.

In a sign of gradual recovery, the size of the country’s shipping industry was estimated to have reached 37 trillion won in 2019, growing from 29 trillion won in 2016 amid the global crisis, according to the Ministry of Oceans and Fisheries.